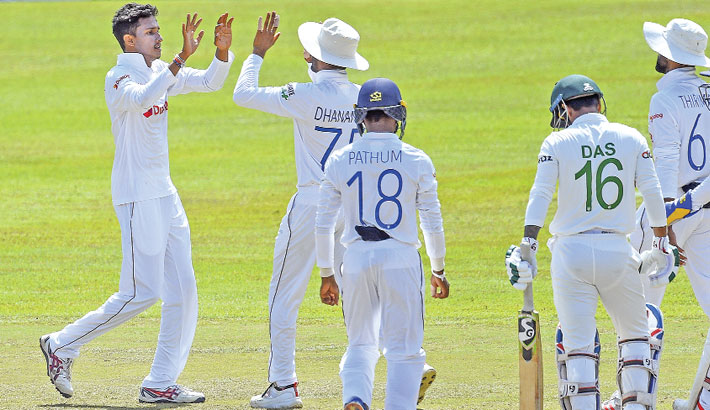 Bangladesh skipper Mominul Haque on Monday blamed the batting unit for failing to perform well in the first innings of the second Test in Kandy which they lost by 209 runs against hosts Sri Lanka to suffer a 0-1 defeat in the two-match Test series.

Despite getting a solid start from Tamim Iqbal and Saif Hassan in the first innings who put up 98 runs in the opening stand, Bangladesh could only manage 251 runs, replying to Sri Lanka’s first innings total of 493-7d.

Sri Lanka capitalised on the poor batting effort by the Tigers as they scored 194-9d in their second innings to set Bangladesh a mammoth target of 437 runs to chase in the fourth innings but the visitors could only make 227 runs to concede a big defeat.

“I feel that we couldn’t play as a batting unit in this Test match, which is solely the reason for our downfall,” Mominul told reporters after the match.

“This is such a wicket, that there is no room for error and you can’t be too defensive here, as being too attacking also could bite you in the end, so you have to have a plan, for all the separate bowlers, as we all had.

“Like when I was facing the left-arm spinner, I had a plan how to play him, same as Tamim bhai also had a plan while facing the right-arm spinner. But obviously, we had failed to execute our plans, which cost us in the end, as we had to go with a moderate approach, neither being too aggressive nor too defensive,” he added.

Mominul claimed that toss also played a big part in the second game in Kandy as he believed it had determined half of the result of the match.

“Toss had a big impact on the game as fifty percent of the match was determined by it (toss). If we had batted earlier you would have seen the story differently and they (Sri Lanka) would have been in our place,” said Mominul.

Meanwhile, Sri Lankan skipper Dimuth Karunaratne was impressed with the way the inexperienced spin attack - Praveen Jayawickrama and Ramesh Mendis performed against Bangladesh in the second Test at Pallekele International Cricket Stadium. Debutant Jayawickrama stole the show with his magnificent bowling figures of 11-178 in the game and he was well supported by off-spinner Ramesh as the duo shared 17 wickets among them and helped the hosts clinch win the match as well as the series after the first game ended in a dull draw. “I'm really happy with their performance.

At a time when we didn't have anyone experienced in the spin bowling department, they came and bowled like experienced players and performed their roles to perfection. Ramesh can improve a little bit more in terms of his lines and lengths and the way he builds pressure. But Praveen (Jayawickrama) did his job 100 percent,” Karunaratne said.

“He played like a bowler who seemed not to have played only 10 first-class matches. It's a great sign for the future of our Test cricket,” Karunaratne added.