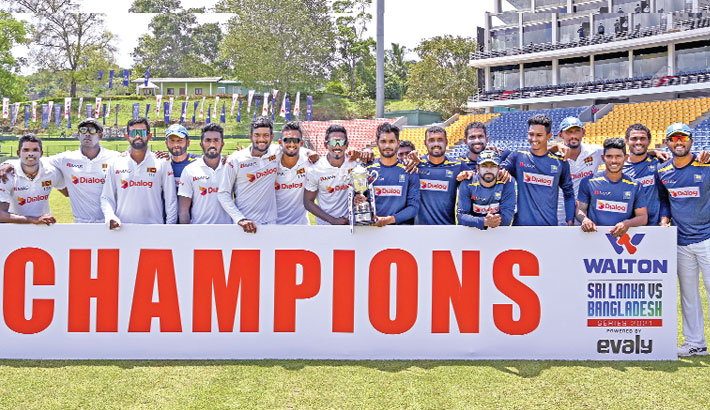 Bangladesh batsmen failed to stage any miracle on the final day as they lost to Sri Lanka by 209 runs in the second Test to concede a 0-1 defeat in the two-match Test series in Kandy on Monday.

Bangladesh could survive only 23 overs on day five before they were bowled out for 227 runs in their second innings and wrap up their ICC World Championship campaign on a disappointing note at Pallekele International Cricket Stadium.

Sri Lanka’s debutant left-arm spinner Praveen Jayawickrama, who claimed 6-92 in the first innings, finished with 5-86 in the second innings to complete a match bowling figure of 11-178, the best bowling performance by a Sri Lankan on debut.

The 22-year old spinner also broke a 71-year old world record as his match bowling figure is also the best performance by a left-arm spinner on debut, surpassing West Indies’ Alf Valentine’s 11-204 against England in Manchester in 1950.

Off-spinner Ramesh Mendis also ended with a career-best 4-103 in the innings.

Bangladesh, who resumed on 177-5, received an early blow when their last recognised batsman Liton Das was trapped in front of Jayawickrama in the third over of the day’s play.

Although Liton (17) took a review, his effort went in vain as ball-tracking showed the ball would have hit the middle and leg.

Overnight unbeaten batsman Mehidy Hasan and Taijul Islam then batted for ten overs to bring some respite in the Tigers’ camp before Dhananjaya de Silva removed the latter for two while coming to bowl his first over of the day.

Taskin Ahmed (seven) then fell prey to Mendis before Jayawickrama dismissed Mehidy (39) and Abu Jayed (0) in the next over to complete his second five-wicket haul in the match and finish the match within the first session of the final day.

Sri Lanka, who didn't impose follow-on over Bangladesh, then made 194-9d in their second innings and set Bangladesh a target of 437 runs that they eventually defended successfully.

Jayawickrama was named man of the match for his outstanding debut while Sri Lankan skipper Dimuth Karunaratne who made 428 runs in the series, most by any skipper against Bangladesh in a Test series, was adjudged as player of the series.

The first Test, which was played at the same venue, earlier ended in a draw.