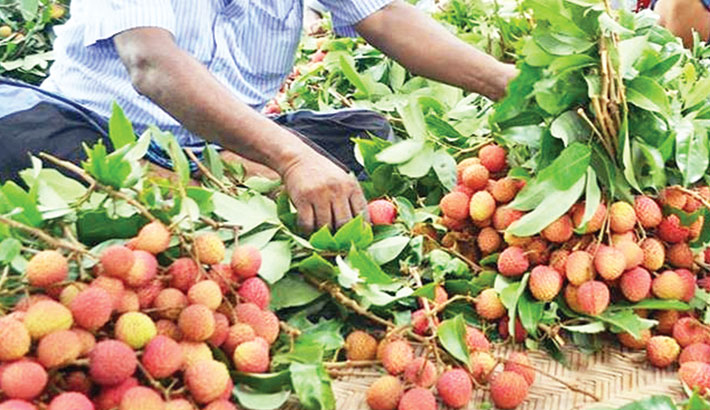 RAJSHAHI: With 11 more days left to appear the Bangla month of Jyestha, commonly known as “Modhumash”, the juicy fruit litchi has started appearing in the local markets including Rajshahi city and its adjacent areas in limited scale amid the Covid-19 pandemic.

But due to its less quantity, the present price is beyond the purchasing capacity of the commoners.

The summer season will bring many other juicy fruits like mango and jackfruit naturally in the region by mid of this month and next June abundantly that will infuse dynamism into the local economy like the previous years, reports BSS.

In the advent of the season, every 100 litchi fruits are being sold at Taka 400 to 450 based on quality and size.

Sellers said the price is high as the supply is scanty but it will be reduced to some extent when the supply will be enhanced within the next couple of days.

Trader Monir Hossain in Shaheb Bazar area said many farmers are harvesting immature litchi with the hope of getting more money.

Dr Alim Uddin, principal scientific officer of Fruit Research Station, said that only the local varieties of litchi have started appearing in the markets at present. But, the Bombay variety is expected to come to the markets within next week abundantly.

He said many people are getting benefits by growing litchi as China-3 (hybrid), Bombay and Madrazi are the most popular varieties in the region. Litchi is grown well in Rajshahi and Dinajpur districts but ‘litchi of Ishwardi’ is very delicious and famous across the country, Dr Alim added.

In addition to commercial farming, high yielding China-3, Bombay and Madrazi variety litchis are also being cultivated on homestead lands.

He said commercial farming of some of the fruits especially mango and litchi are gradually increasing in the region.

Dr Alim, however, mentioned that satisfactory flowering was not seen in many of the trees in the region including Ishwardi, which is famous for litchi production, during the current season that will create a negative impact on total production.

Abdur Razzaque of Kapasia village said all of his 30 litchi trees on one bigha of land bloomed in scanty this year and there were a low number of ‘guti’ (young litchi) on the branches.

Sharing his personal experience, he said a five-year-old tree can produce around 100 to 150 kilograms of litchi which are equivalent to 2,000 to 6,000 pieces of fruits in number. Most of the families at Bargachhi, Bagsara, Charghat and Bagha have become economically solvent by cultivating the fruit.

He said there are hundreds of litchi orchards on more than 1,000 hectares of land which produces huge yields. This production meets the local demand as well as being consigned to other parts of the country every year, Abdul Awal added.