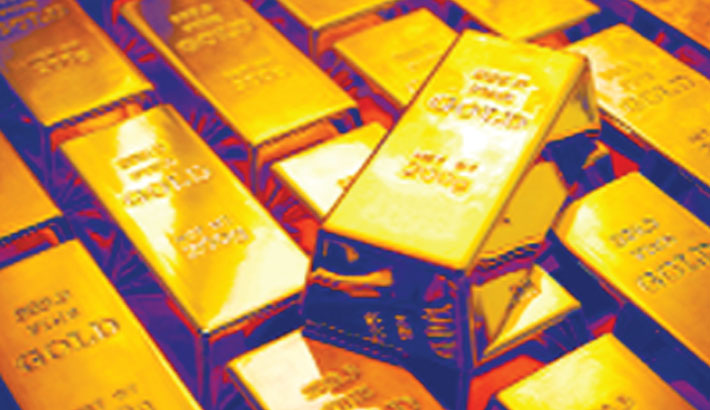 BENGALURU: Gold prices rose on Monday as a retreat in US Treasury yields and worries over surging Covid-19 cases in some countries boosted the metal’s appeal, while palladium held firm after surpassing the US$3,000-per-ounce level in the previous session. Spot gold was up 0.5 per cecnt at US$1,777.67 per ounce by 7.37am GMT. Trading in Asian hours was low due to public holidays in China and Japan. US gold futures rose 0.6 per cent to US$1,777.60 per ounce, report agencies.

“The pandemic situation in Japan and India remains a key concern among market participants, so that’s driving up the demand for safe-haven assets, including gold,” said Margaret Yang, a strategist at DailyFX, adding that retreating US Treasury yields lent further support.

India on Monday reported more than 300,000 new coronavirus cases for a twelfth straight day, taking its overall caseload to just shy of 20 million.

The dollar index slipped 0.1 per cent, after hitting a near two-week high earlier in the session, raising gold’s appeal for other currency holders.

Investors now look forward to a raft of US economic data this week, including the ISM manufacturing survey and April payroll numbers, for further clues about recovery in the world’s largest economy.

On the technical front, “gold has resistance at US$1,790 an ounce, followed by a double top and the 100-day moving average in the US$1,800 an ounce area. Support is nearby between US$1,755 and US$1,760 an ounce,” Oanda senior market analyst Jeffrey Halley said in a note.

Elsewhere, auto-catalyst metal palladium rose 0.7 per cent to US$2,957.50 per ounce, after hitting an all-time high of US$3,007.73 per ounce on Friday over supply concerns.