The Game Is Not Over, It Has Just Begun 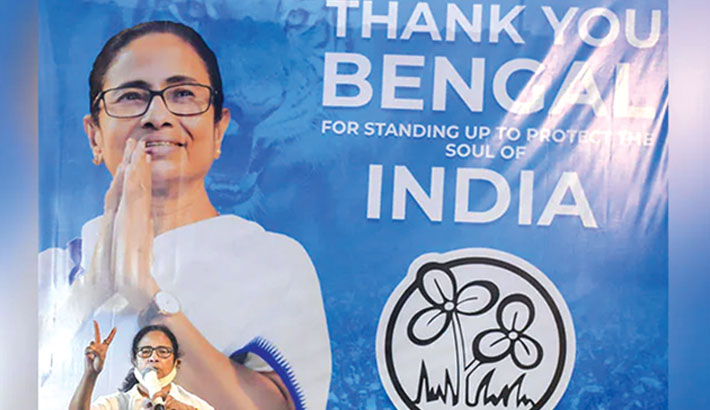 What can be bigger breaking news than this! The change in West Bengal that the BJP was touting as ‘real chage’ did not happen. What happened is reinstatement. The government of Mamata Banerjee is back to power in Paschimbanga. But after analysing the election results what comes to mind first is that BJP may not have won but strengthened its base in the state. The BJP had only 3 MLAs in the 2016 assembly, but now it has 76. Thus it has already become the main opposition. That BJP is coming with so many seats in the legislative assembly indicates that there is no full stop in BJP politics at the moment; rather it will carry out anti-Mamata politics with renewed vigour.

Now the question is why the BJP lost? Let's discuss one by one. I would like to point out ten reasons behind the defeat of the BJP.

The First reason – In this election, the political card of Bengali nationalism had come to the prominence, which Mamata Banerjee used very cleverly. She termed Modi-Amit Shah as ‘outsiders’.

Many felt that the politics of provincialism of Bengalis and non-Bengalis was very subtle in it. But then Mamata Banerjee, her Trinamool Congress, repeatedly clarified that it was not actually Bengali vs. non-Bengali, in fact it was Modi-Amit Shah, who were attacking the identity of Bengali culture like Nadir Shah. The Renaissance city of Kolkata, the pride of Bengalis, is the largest cultural city of the nineteenth century. The capital was shifted by the British in 1911. Bombay became the commercial capital. Delhi became the centre of politics, and Paschimbanga was relegated to an insignificant position.

In Paschimbanga, CPM once pursued the politics of deprivation by pointing finger of blame at the Centre for everything from the ‘tax equation policy’ to the revenue terming it ‘step motherly attitude’ to the state. But Mamata Banerjee showed how to use this ‘Bengali identity’. The use of Bengali identity means that the BJP wanted to consolidate the Hindu vote with the slogan of ‘Joy Sriram’. That was not possible because Bengalis have both Hindu and Muslim sides. I will come to the discussion later as the Muslim community has become more and more consensual towards Mamata. But the Bengalis even most of those in Hindu society did not vote for BJP because of their Bengali identity. They voted for Mamata. In 2019, BJP got 18 seats. But we must keep in mind that the statue of Vidyasagar at Vidyasagar College on College Street was smashed during a road show of Amit Shah. The BJP suffered for that. The BJP did not get about 9 seats in the main city of Kolkata; the Trinamool got it. Since then, Mamata Banerjee has realised that the politics of Bengali nationalism can play an important role here.

Second, Mamata was attacked jointly by opposition leaders, which gives her the benefits of playing the victim card. That Prime Minister Narendra Modi, along with other leaders including Amit Shah, frequently visited Kolkata and took part in election campaigns for an Assembly Election of a state, which was unusual for a prime minister of the largest democratic nation and a sign of ‘over-performance’ in state politics, may not be liked by Bengali people in Paschimbanga. Mamata Banerjee tactfully used her communication skills to translate the opposition’s attacking words and activities in her favour. It is somehow similar to the incidents when Narendra Modi was often attacked by Congress leaders during his tenure as Chief Minister of Gujarat but it all worked in favour of him instead. Mamata, this time, managed to play that game.

Third, the polarisation BJP targeted to create is only possible in a state like Assam where 30 per cent of people are Muslim. But BJP think tanks failed to understand that Assam and West Bengal are two different states with the difference in mentality and school of thoughts. The School of thoughts of Bengalis is quite different from that of the Assamese. Though we always say India is undivided, still every state is unique in its ideology and philosophy. Therefore, failing to realise those factors, BJP has become unsuccessful to create political polarisation between Hindus and Muslims like they do in Bihar and Uttar Pradesh. Hindus in Paschimbanga are not as much ritualistic as the Hindus of Uttar Pradesh or Bihar are. Unlike the two states, Bengali Hindus enjoy the taste of different food items prepared by Muslims. Even Hindus very often take a trip to Biriyani houses owned by Muslims at the weekend. Some of them even acknowledge that Muslims are better chefs. These people are actually cosmopolitan Hindus. This Bengali society, as Amartya Sen always says, bears the legacy of 600 years of Buddhist rule, 400 years of Islamic rule and 200 years of British rule.  It has made it a secular society where people cannot be separated by religion. Moreover, BJP’s attacking language towards the Muslims has made Muslims afraid of and left no options for them but to support Mamata. Indian Secular Front even could not make an impact in this election as Mamata Banerjee was able to make voters realise that this party actually benefits BJP. Before the independence of India, Muslim League once got the majority in the united Bengal. But after the partition of India, and therefore Bengal, this is the first time a Muslim dedicated political party has been formed in Paschimbanga. However, they gained nothing from this election as Bengali Muslims rightly understand that if Muslim votes are spilt the ultimate gainer would be the BJP. So Muslims have also cast their ballots in TMC’s box.

Fourth, Prashanta Kishore’s way of handling should be credited for this. The reason behind it is that in Paschimbanga a sort of public opinion and a kind of perception was created against Mamata. But, as against it, Mamata had taken a host of populist measures such as health cards, free uniform for kids, feeding children at cheaper rates etc. And it is here that PK’s ideas played an effective role and served as one of the major reasons.

Fifth, the tactics of enticing dissidents from Trinamool also went in favour of Mamata. The reason is that Bengalis were not positive in their approach to those who fled to meet Amit Shah under the dark cover of the night. They were considered as nothing but renegades. BJP gained little from its tactics of creating rifts within Trinamool. The more BJP bragged about securing more than two hundred seats, the more it boomeranged on them.

Sixth, Mamata Banerjee also displayed skill in micro-management of affairs. The episode of the self-declared Maharaja of the Rajbanshi can be cited in this connection. The Maharaj had some sort of influence over the members of his community. Trinamool had once filed cases against him and, as a result, the latter fled to the jungle in Assam. But as Amit Shah met him, Mamata sent an emissary and brought him back to Trinamool. The same is the episode with Gurung. If Amit Shah can resort to Chanakya tactics, then what is the harm if Mamata makes use of the same? She successfully utilized the influence of the Maoists and Nakshalites. She also had praise for the ultra-leftists who adopted the policy of ‘No Vote to BJP’. She even had words of appreciation for the Nakshalite leader Dipanker Bhattyacharia. Mamata did all these in a masterful manner.

Seventh, when CIB or enforcement was sent to the house of Abhishek Bandhupaddhay, Mamata Banerjee adopted an offensive strategy. She went to Abhishek’s house, took his little daughter onto her lap and advised him not to be scared. She rather made him a star campaigner. The tactic served Mamata’s interests. She took counter measures against whatever endeavours BJP made.

Eighth, the composer of the music, ‘Khela Hobey,’ I don’t know whether he is still with the Trinamool Congress or not. But, listening to the music, Mamata thought that it had earned grand popularity. That had spread like waves among mass people. There, Mamata and PK made the music a weapon for publicity in social media. That ‘Khela Hobey’ music was being played in various public meetings. This was a communication network. In different social media and various events, ‘Khela Hobey’ was made popular. And the BJP was opposing it. Narendra Modi said, “Khela noi, Khela Hobey Na, Bikash Hobey.” But, the situation was not changed. ‘Khela Hobey’ is not a negative term. Beginning from ‘Khela Bhanger Khela’ Rabindranath too stated different words. May be, Bengalees have a love for the word, ‘Khela’ in sub-conscious minds. The new generation also liked it because Bengalis have a connection with East Bengal, Mohonbagan and cricket. As to why, Mamata used the word ‘Khela Hobey.’

Ninth, the national vote meaning the scheduled caste vote, OBC vote. The CPM did not do polling on this basis. It did that on the basis of class.

Mamata herself nourished the Matua vote. She took care of Matua mother and shifted her to hospital. The BJP wanted to intervene. Shantonu Thakur won the BJP’s Lok Sabha. But, Mamata Banerjee succeeded in consolidating the vote bank of castes and creeds.

Tenth, the face of Mamata Banerjee. Probably, Abhishek became the second star campaigner. He used to go everywhere. People assembled there. But, Mamata was the chief campaigner everywhere. Being injured, she gave a sentiment sitting on the wheelchair. She made everything Mamata-centric. She was the lone woman chief minister who faced a collective fight. This is why she was able to consolidate the vote bank of women. Mamata has built the women vote bank as per her own choice. I can remember that during her tenure as a rail minister, she arranged free monthly pass for helpers who came from distant places like Shialdaha rail station or elsewhere. Mamata did all these things. Because of the reason, the vote bank in rural areas remained stronger. That also worked for Mamata. She came back victorious by defeating the BJP. Here, one thing should be remembered. It is that a right-leaning opposition party has emerged against the Trinamool Congress. So, in the coming days, Mamata must have to move forward cautiously.

In the end, the vote bank of the Congress and the CPM has gone to the BJP, which is a bad news for Mamata. But the Muslim vote of the CPM was also turned upside down due to the alliance with Siddiqui. The CPM was wiped out. If the CPM had cut the Muslim votes a little and if the contestants from new generation had cut the vote, Mamata would have been in danger. So, Mamata did not come to terms with neither the Congress nor the CPM. There was a chance for her to negotiate with the Congress or the CPM to form a coalition, but she did not do so. She took the risk. For which the Congress suffered the setback, and the impatient Adhir Chowdhurys and Abdul Mannans proved wrong. Both Sonia Gandhi and Rahul Gandhi are now facing a crisis there. The upcoming 2024 Lok Sabha elections will be even more interesting, because if the Trinamool had lost and the BJP had won, Narendra Modi’s 2024 roadmap would have been clearer. Narendra Modi could have capitalized on the victory in Paschimbanga amidst the mismanagement of Corona and the financial crisis by dismembering Mamata and the opposition. But that did not happen. But will be the opposite happen? The opposite is – Mamata Banerjee will become a centre of unity for the opposition. A unity among the opposition parties will be established under the leadership of Mamata. The UPA will be revived again.

So, now is the time to get involved in national politics. Nothing final is happening right at the moment. But now the beginning has already been made. So the game is not over, rather it has just begun.