Vaccines to be procured at any cost: PM 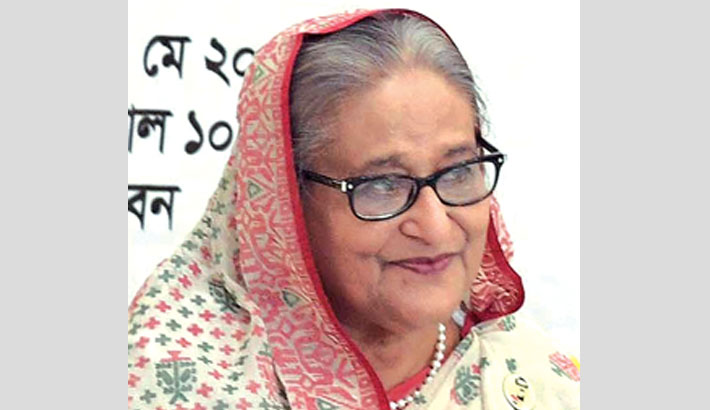 Prime Minister Sheikh Hasina on Sunday reaffirmed that her government will procure vaccines at any cost to protect people of the country from deadly coronavirus.

“We are procuring more vaccines, no matter how much it costs. We’ll bring vaccines,” she said while inaugurating the second-phase disbursement of financial assistance for the corona-hit poor people through mobile banking.

The premier virtually joined the programme from her official residence Ganabhaban where beneficiaries in Bhola, Joypurhat and Chattogram districts were connected.

Under the financial assistance programme, each family is receiving Tk 2,500 as Eid gift from the prime minister during pandemic.

On the first day, some 22,895 families received financial assistance and the remaining ones will be given the assistance by May 5.

A total amount of Tk 9.12 billion has been allocated for 3.65 million corona- affected low-income families.

Sheikh Hasina said the government is carrying out country-wide vaccination programme as it will provide vaccine doses to the people to protect them from the bug.

Stressing that the government will put in all-out efforts to procure vaccines, she said, “We’re procuring each dose of the vaccine, but providing it free of cost so that people can stay safe.”

The premier urged all to strictly follow health guidelines no matter whether they have taken the vaccine shot or not.

Referring to the financial assistance to 3.65 million families, she said, “Our all efforts are on how to help the destitute people and we are continuing our activities.”

The premier said Awami League always stands by people whenever it is in power or in opposition.

“Following the footsteps of Father of the Nation Bangabandhu Sheikh Mujibur Rahman, Awami League always with the people and serve them in their tough time,” she added.

The associate bodies of the ruling party are helping the people during the hard time of corona pandemic by providing them with free medical treatment, taking sick people to hospital, managing funeral, giving food assistance and paddy harvesting, the premier said.

Sheikh Hasina also came down heavily on the opposition parties and critics for remaining silent instead of standing by the people amid the critical time.

She asked the opposition parties to give an account of how many people they have helped during the pandemic.

“Many people talk about need for strong opposition party in the country. Awami League was also in the opposition and it worked for people and rushed to the people during any disaster. This is the work of a opposition party,” she said.

The premier questioned where is the opposition party at this time of disaster though that party tries to oust the government through statements and arson attacks regularly.

As the second wave of Covid-19 began, the premier said over Tk 15 billion has already been allocated for distribution among the destitute and vulnerable people in this difficult time.