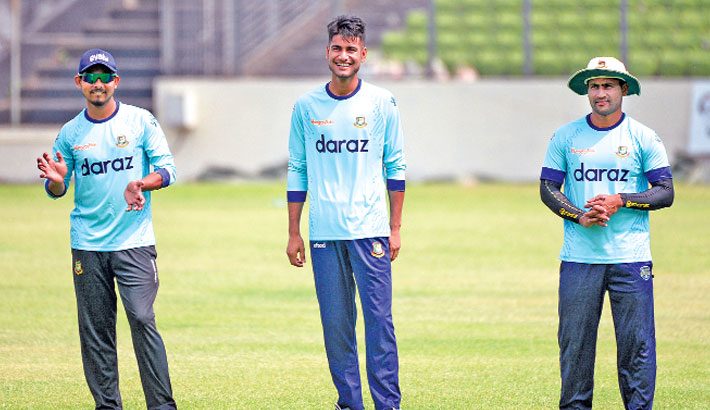 (From left to right) Mosaddek Hossain, Naim Sheikh and Imrul Kayes are seen during a training session at the Sher-e-Bangla National Stadium in the capital on Sunday. — TANVIN TAMIM

Several members of Bangladesh preliminary squad for the upcoming three-match ODI against Sri Lanka began their preparation at the Sher-e-Bangla National Stadium on Sunday.

As many of the cricketers of the squad are busy in Sri Lanka for the two-match Test series against the hosts along with the coaching staff, others trained under the guidance of the local coaches - Mizanur Rahman and Talha Jubair while newly appointed selector Abdur Razzak also paid a visit to see the condition of the cricketers.

Mahedi Hasan, Hasan Mahmud and Mohammad Saifuddin were the only available cricketers who didn’t join the practice session on the opening day.

Shakib Al Hasan and Mustafizur Rahman, who are currently taking part in the Indian Premier League, are expected to join the squad on May 19.

The three-match series is scheduled to take place respectively on May 23, 25 and 28 at the Sher-e-Bangla National Stadium.

BCB earlier on Saturday included uncapped Shohidul Islam in the 23-member preliminary squad while the selectors made a surprising move by calling back left-handed batsman Imrul Kayes into the preliminary squad.

“I like to thank the selectors for calling me in the preliminary squad. It’s really an inspiration for me. I think this is a big opportunity for me to revive my career. I think I will be able to make myself ready for it and work on my lackings,” Imrul said on Saturday.

Members of Bangladesh Test team are expected to arrive from Sri Lanka on May 4 and they are likely to join the others on May 7 before the cricketers go for an eight-day Eid vacation from May 10.

Sri Lanka is expected to arrive on May 16 and after three days of room quarantine, they will start their preparation from May 20.