It’s like a ‘dream come true’ moment for swimmer Junaina 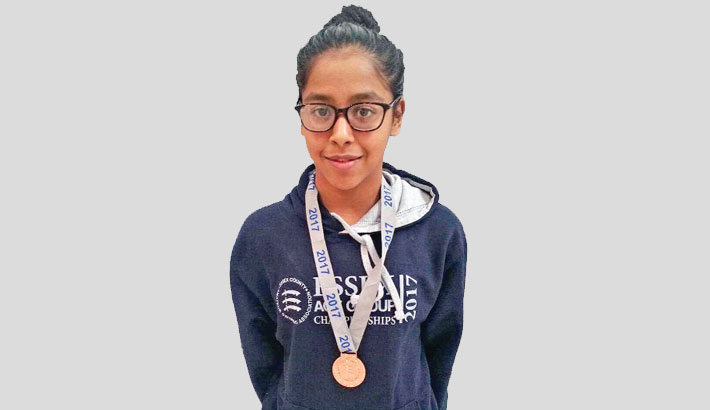 Young national swimmer Junaina Ahmed is over the moon after she heard that she will participate in the upcoming Tokyo Olympics, scheduled to be held from July 23 to August 8.

The 17-year old England based swimmer was beaming with confidence and more than anything else looked relieved to repay the struggle of her parents as they sacrificed their time to back her pursuing her dream since the age of six.

“Before and after every race my mother (Rujina Ahmed) would pull me aside and ask about how it went and she would make the plan about my proceedings and both my parents have been very supportive since my childhood,” she added.

Junaina, who picked four bronze medals in South Asian Games in 2019, confirmed her place in the Olympics courtesy of her performance in the 18th FINA World Championship held in South Korea in 2019.

Her father Jubayer Ahmed went to England on a spouse visa in 2001 and since the birth of Junaina, their first of four children (three daughters and a son), was determined to develop her as a swimmer considering he loved the sport since he had been watching the Olympics.

“I have always loved swimming since I have been watching the Olympics and when I came to London saw that there is an opportunity to develop her as a swimmer. She started swimming at the age of six and I didn’t hesitate to put her in a swimming club when her coach suggested to me that she is learning it fast and have all that takes to be a good swimmer,” said Jubayer, adding that it’s difficult to manage everything considering the expense in the UK is quite high.

“Honestly speaking it’s difficult to manage because the expense is quite high but it was done by me and my wife as she (Junaina) is trying to fulfil our dreams as I always told her that if you can do well someday you can represent the country,” he said, adding that swimmer Mahfuzur Rahman Sagar played a big role behind introducing her to country’s swimming fraternity.

“I messaged Sagar bhai through Facebook that I want my daughter to compete in a national swimming competition and he responded immediately and asked me for her timing probably in 2016 or 2017 and later spoke with the Swimming Federation. Afterwards, they (Swimming Federation) asked me to come to Bangladesh to take part in the junior national competition and that is how it all began,” he said.

“After seeing her performance both Bangladesh Army and Navy wanted to include her in the team and I decided to opt for the latter and the rest is history I guess,” he added.

Junaina, who idolizes Swedish swimmer Sarah Sjöström said her target is to make a timing below 28 seconds in the 50m freestyle at the moment.

“I’m very satisfied with my performance (in Bangladesh Games) as there was no practice for about six months,” said Junaina.

“I’m just trying to go out there and give my best and I’ll work hard for the following couple of months because the lockdown has been lifted so I’m going to work hard, focusing on my fitness, my power and my strength, to do my very best in the Olympics.

“I’m going to do swimming, ten sessions a day minimum, gym sessions and land training to fully prepare my stamina and power for the 50 metres. I’ll also discuss with my coach about the planning of the next couple of months preparations,” she added.

Junaina, an A-level student who is waiting for her grades as she has an offer from a medical institution for higher studies, said that though there is a cultural difference she enjoys the company of other swimmers whenever she is in Bangladesh to take part in the national meets.

“There is a little problem as I can’t speak Bengali fluently but I understand the most. But at the end of the day, we are all swimmers and the other guys are very friendly. I enjoy their company a lot. It’s very nice,” she concluded.