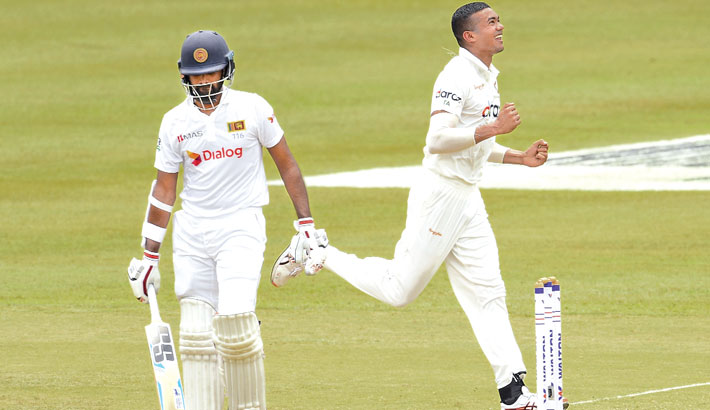 Bangladesh pacer Taskin Ahmed showed rare consistency as he bowled with the same aggression in the second Test against Sri Lanka after his effort in the series opener at Pallekele International Cricket Stadium in Kandy.

Taskin, who was the team's most feared bowler in the limited-overs series against New Zealand, bowled his heat out during the series but his performance might not be reflected in the wicket-taking list but he was perhaps the only silver lining for Bangladesh in their disappointing tour in New Zealand.

The 26-year old can claim him unlucky as the fielders consistently dropped his catches since his making return to the national side but the way he managed to show his consistency in both Tests surely will enhance his confidence.

On Friday, during the second day of the second Test against Sri Lanka, it was a different story in the morning session as the bowlers finally found some assistance from Kandy pitch after runs galore in the first six days of the two Tests.

The bowlers of the visiting team did well to keep the run-scoring in check, with only 18 runs being scored in the first hour and were rewarded finally when Lahiru Thirimanne (140) fell, gloving a short delivery down the leg-side off Taskin.

It was a deserved reward for the perseverance of Taskin and he should take another in the same over but everyone missed the faint edge on Angelo Mathews’ bat as he prodded forward.

However, the reprieve didn't cost the tourists as the relentless pacer kept harrowing Mathews, eventually forcing a thick edge that was caught by Liton Das at the back while he bowled Pathum Nissanka to end the day with 3-119 in 32.5 overs and brought some resistance in the Tigers camp.

“I think Taskin bowled really well and set the tone for us,” left-arm spinner Taijul Islam told reporters at the close of play of day two.

Taskin’s childhood mentor Mahbub Ali Zaki said that he is impressed with his bowling adding that he feels he is reaping the benefit of the hard work that he had put in during the last one and a half year.

“We formed a team where we had trainers, physio and dietician along with bodybuilders. We worked on his muscle so that he can gain more strength keeping the injuries in mind after Taskin called me and said that he was ready to take up the challenge and wanted to transform as a bowler in late 2019,” Zaki told The Daily Sun.

“Being a fast bowler, Taskin is all about pace and speed. Without pace, he is nothing. Taskin even expressed his desire to bowl around 150kph. For that, we started working on various aspects right from his body transformation to muscle development along with developing his running technique.

“We knew until he takes his fitness level to a world-class standard, he can't reach the goal considering his current age,” he added.