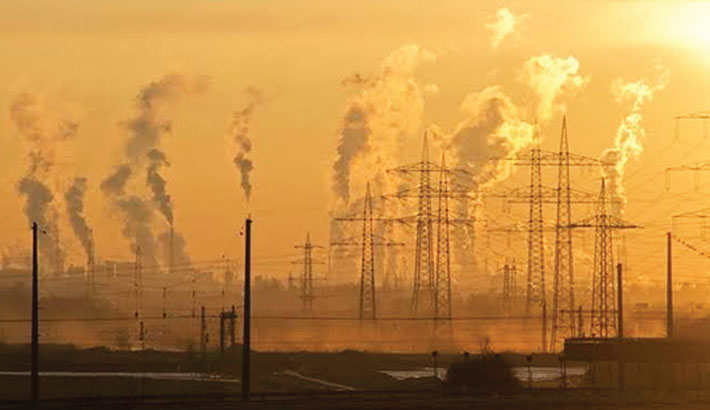 The environment is formed by the combination of all the things around us. The three main components of the environment are soil, water, and air. When any one of these becomes polluted, the whole natural environment is destroyed. The amount of environmental damage depends on the level of pollution. Unplanned industrialization and urbanization are spreading at a faster pace.As a result, soil, water, and air are constantly being polluted. For normal human respiration system, the air must contain 6% nitrogen and 20% oxygen, but when air becomes polluted, it becomes deficient in essential nutrients and various impurities take its place. It gradually becomes unsuitable for breathing. While we breathe in this polluted air, a variety of respiratory complications takes place. As a third world country, Bangladesh needs to think about the devastating effect of air pollution. If necessary steps are not taken while the situation is still within reach, there might be dire consequences. According to a global study, around 7 lakh people died due to air pollution in 2019.

The number of deaths in Bangladesh in 2019 was 1 lakh 73 thousand 500 and in 2016 it was 1 lakh 23 thousand. According to a report by the ‘‘State of Global Air 2020”, air pollution is the fourth leading cause of health risks, followed by high blood pressure, tobacco use, and malnutrition. According to a report by a US-based research institute, the air in South Asia is the most polluted in the world. According to experts, Bangladesh's air quality is deteriorating day by day and the main reason for this is the lack of effective waste disposal policies. Particulate matter is the worst air polluter. It is a mixture of tiny organic and inorganic particles that, when mixed in the air, reduce our visibility and make everything in the near distance blurred. The most destructive particulate matter is Particulate Matter 2.5 (PM2.5).This PM2.5enters the body with human breath and causes extensive damage. The top 20 most polluted cities are from India, Pakistan, and China. Our capital Dhaka is in the 21st position. Most of the cities in South Asia have severe air pollution.

Causes of air pollution:  There are numbers of causes of air pollution. Chemical waste from industrial plants mixes with the environment and pollutes the air. Cement, sand and dust from concreteused in building construction aresome of the regulators of air pollution. The gas emitted from brick kiln mixes with the air and pollutes the air. One of the main sources of air pollution is the black smoke emitted from motor vehicles. As a result of unplanned industrialization and urbanization, the amount of forest is decreasing. Lack of proper waste management is polluting the air by producing gas from decomposed waste.The oxy-acetylene flame used to cut ships produces gas which mixing in the air and pollutes it.Air is polluted as a result of emissions of harmful pigments used in garment factories.Deforestation to provide food and shelter for a growing population, extraction of timber, construction of habitats, and creation of agricultural land, create instability in the air.The use of chemical fertilizers and pesticides and their immediate release into the air is causing air pollution.Tobacco products and drugs, smoking also pollute the air.

Problems caused by air pollution:We need to be aware of the problems caused by air pollution.Causes of lung disease: In addition to temporary respiratory complications, breathing in contaminated air can cause shortness of breath, runny nose, cough, bronchitis, pneumonia in children, asthma, etc. Over the past decade, the incidence of lung problems has increased significantly around the world. Deadly cancer:Air pollution is largely responsible for lung and respiratory cancers.The treatment is extremely expensive and the chances of recovery are very rare.Causes health risks: High blood pressure, heart disease, allergies, cataracts, vision and hearing loss, etc are the health risks due to air pollution. Although there is no direct link between air pollution and coronavirus, there is evidence of a close relationship between air pollution and lung problems.Neonatal and infant mortality: Worldwide around 500,000 children die each year due to air pollution. Air pollution was responsible for 15 percent of child deaths in Bangladesh in 2020. The most devastating effect of air pollution is the greenhouse effect. Carbon monoxide and dioxide emitted from factories and vehicles are breaking down the ozone layer. The harmful ultraviolet rays of the sun easily penetrate the earth and increase the internal temperature of the earth. Scientists estimate that the earth's surface temperature will rise by an average of 1.3 Degrees Celsius by 2030 and by an average of 2.8 Degrees Celsius by 2060. As a result, the ice of the North and South Poles has begun to melt. The sea level is rising due to the melting of the ice. A large part of the land area of many South Asian countries, including Bangladesh, could be submerged.Acid rain: The sulphur and nitrogen gases are produced by flame of oxy-acetylene used for ship building. Those gases are mixed with air to cause acid rain. The effect of acid rain on arable land is loss of fertility.The precious marble coating of the TajMahal, for example, was badly damaged by the acid rains.Reducing life expectancy:Particulate matter enters the human body and reduces its immune system. According to the World Health Organization (WHO),the average life expectancy of the people of Bangladesh can be increased up to 1.3 years if the PM2.5 limit is met.

Remedial measures: People at all levels must to address pollution as a top priority. Over the past decade, no steps have been taken to improve air quality in South Asia, Africa, and leadingcountriesof the word. The injustice we have done to the environment over the years is not possibleto eradicate within a day. It is important to identify the root causes of air pollution and take effective measures.We need to monitor the activities of factories, brick kilns, buildings under construction etc. to prohibit the free release of pollutants in nature.Use of natural gas, biogas and electricity is an alternative to fuel oil.Reducing the use of primitive coal-fired power plants and setting up windmills, solar power, and nuclear power plants can ensure adequate safety.Various pollution control technologies and strategies are available nowadays. Because a large share of air pollution is caused by combustion of fossil fuels , the reduction of their use can reduce air pollution drastically. The most effective measure is the switch to clean power sources which don't cause air pollution. Increased fuel efficiency (such as the use of hybrid vehicles), conversion to cleaner fuels or conversion to electric vehicles can reduce air pollution. Titanium dioxide has been researched for its ability to reduce air pollution.

In 2014, Prof. Tony Ryan and Prof. Simon Armitage of University of Sheffield prepared a 10 meter by 20 meter-sized poster coated with microscopic, pollution-eating nano-particles of titanium dioxide. Placed on a building, this giant poster can absorb the toxic emission from around 20 cars each day. Air pollution can be reduced by 30 percent if the garbage is disposed of and burned properly within certain limits.

We need to control the growth of population and to make the present population aware enough to protect the environment.The most effective measures that can reduce air pollution to a great extent are proper maintenance of the remaining forests,planting of trees as much as possible and motivating the people for a greater forestry in the country. A very effective means to reduce air pollution is the transition to renewable energy. According to a study published in Energy and Environmental Science in 2015 the switch to 100% renewable energy in the United States would eliminate about 62,000 premature mortalities per year and about 42,000 in 2050, if no biomass were used. This would save about $600 billion in health costs a year due to reduced air pollution in 2050, or about 3.6% of the 2014 U.S. gross domestic product.

There is limited evidence that efforts to reduce particulate matter in the air can result in better health in Africa, the Middle East, Eastern Europe, Central Asia, and Southeast Asia.Above all, mass awareness campaigns, advertisements in the print and electronic media will help people to be more realistic. Government, private organisations and local NGOs need to make a concerted effort to curb air pollution effectively.

The responsibility to protect the environment lies not only with the government but with everyone.People are an integral part of the environment. Air pollution is a man-made disaster and only people can deal with it effectively. If everyone becomes responsible for protecting the environment, we can stop the silent killer of the environment which is called air pollution. All we need to do is to take adequate measures for environmental maintenance, dissemination of knowledge, and its proper applications at all levels.

The writer is an army officer.