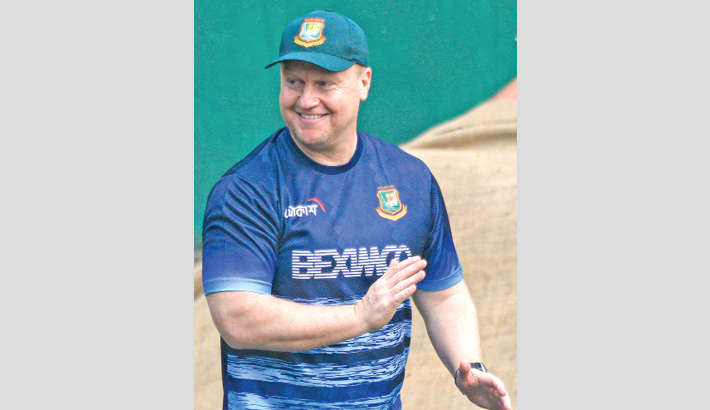 Bangladesh batting coach Jon Lewis said on Thursday that they need to learn from their opposition as far as their batting is concerned in the ongoing Test considering the start of the second Test seems to be a mirror image of the opening game.

Bangladesh is nearly in the same position that was successfully handled by the hosts in the series opener after Sri Lanka made 291-1 on the opening day of the second Test.

Sri Lankan batsmen frustrated Bangladeshi bowlers the whole day and started from where they left in the opening Test as they earlier gave Bangladesh a befitting reply with the bat by making 648-8d in replying to their 541-7d in the first innings of the drawn first Test.

On a pitch that was pronounced dead on arrival, Sri Lankan openers settled in and played some attritional cricket, clinically picking out the balls to attack.

Dimuth Karunaratne and Lahiru Thirimanne made 118 and 131 not out respectively while Oshada Fernando made an unbeaten 40 as they are all set to pile more misery on Bangladeshi bowlers.

“I think it is a bit of a mirror image of the first Test. Although the pitch was good, we hoped to apply scoreboard pressure but Sri Lanka dealt with it very well. We have to learn from that, and do the same,” Lewis told reporters after the opening day’s play. “It seems like Sri Lanka will get a big score. We will spend at least another couple of sessions in the field and it is something we have to deal with. The pitch still looks good at the moment and we have to deal with the fact that they have a score on the board. We have some batsmen with good form behind them after the first Test.

“I’d imagine Sri Lanka is hoping this one would deteriorate a bit more and it won’t be as good on day four or five. We will have to wait and see how the pitch wears out in the next couple of days,” he added. Lewis said that he is not ready to judge the pitch after just one day but added that if it remains the way it behaved in the opening Test it would be far from ideal.

“I would like to judge it later in the game. I don’t want to judge the pitch on day one. If it does play like the first one (Test), then that’s necessarily not ideal. There needs to be a bit more even contest between bat and ball. But if this starts to deteriorate and has more assistance to the spinners later in the day, then you can describe it as a decent Test pitch. We will have to wait and see,” Lewis said.