Another frustrating day for Bangladesh bowlers 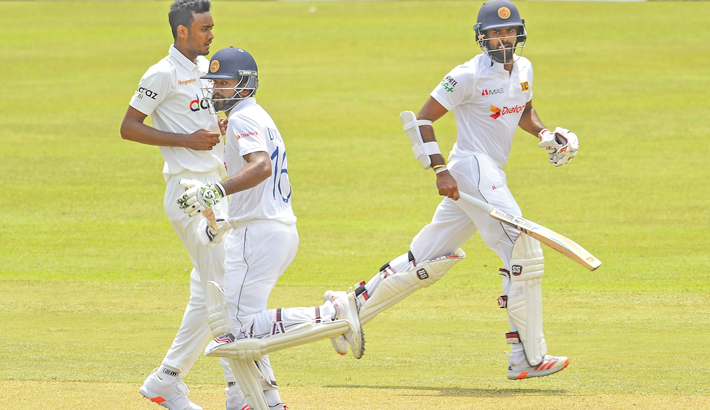 Sri Lanka captain Dimuth Karunaratne (centre) and batsman Lahiru Thirimanne (right) run between the wickets as Bangladesh bowler Shoriful Islam looks on during the first day of their second and final Test at Pallekele International Cricket Stadium in Kandy on Thursday. – SLC PHOTO

Bangladeshi bowlers found them at the receiving end again after they could take only one wicket on the opening day of the second Test against Sri Lanka at Pallekele International Cricket Stadium on Thursday.

Sri Lankan openers Dimuth Karunaratne and Lahiru Thirimanne made the best possible use of the visitors’ poor bowling effort as both of them struck hundreds and guided the hosts to score 291-1 in 90 overs at stumps of day one in Kandy.

Karunaratne struck 118 off 190 balls, his second successive hundred in the series while Thirimanne made an unbeaten 131 off 253 balls as the hosts are all set to make a gigantic first innings total against Bangladesh in the match.

Bangladeshi bowlers failed to put the hosts under any kind of pressure and leaked runs consistently as like the opening Test that helped the Sri Lankan openers make merry on the opening day after skipper Karunaratne won the toss and decided to bat first.

Both Karunaratne and Thirimanne played out the opening session watchfully as they made 66 runs in 27 overs but they started to come out from the shell in the second session where they scored 122 runs in 31 overs.

Bangladesh’s poor fielding effort only amplified the problems of the visitors as they missed a clear chance to dismiss Karunaratne on 28 when Najmul Hossain failed to take a sitter at slip off Taskin Ahmed in the first session.

Karunaratne, who completed his 5000 Test runs during the match, utilised the opportunity and completed his 12th Test hundred, third against Bangladesh.

Debutant pacer Shoriful Islam, who replaced Ebadot Hossain, finally broke the opening stand in the final session by removing Karunaratne at the back after Liton Das took a fine low catch.

The dismissal of Sri Lankan skipper also ended a 209-run opening stand, the highest first-wicket partnership record in a Bangladesh versus Sri Lanka Test that eventually set the tone for the remaining batsmen.

Despite the loss of Karunaratne, Thirimanne continued his sublime batting effort and completed his third Test ton and he put up an unbroken stand of 82 runs with Oshada Fernando (40 not out) for the second wicket to ensure Sri Lanka finish the day in a strong position.

Bangladesh could have gotten Thirimanne in the final over of the day after he was given leg-before off Shoriful. However, he survived after taking a review that showed the ball would have gone over the stumps.

Sri Lanka earlier made two changes, comparing to Bangladesh’s one from the first Test as they brought in off-spin bowling all-rounder Ramesh Mendis and debutant left-arm spinner Praveen Jayawickrama in place of Wanindu Hasaranga and injured pacer Lahiru Kumara.