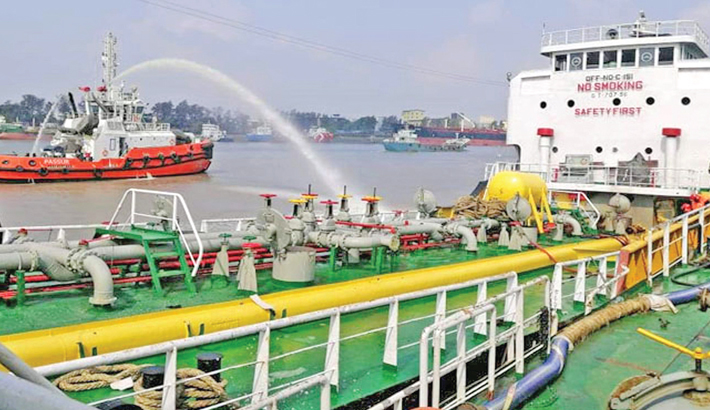 A fire tug boat sprays water to extinguish a fire at an oil tanker ‘MT Irabati-1’ at a jetty on the south bank of the river Karnaphuli in Chattogram on Thursday. Two crewmembers were killed and three others sustained injuries in the fire incident. —SUN photo

CHATTOGRAM: Two crewmembers were killed and three others sustained injuries as a fire broke out at an oil tanker at a private jetty in the river Karnaphuli on Thursday.

The deceased were identified as Nizam Uddin, 40, and Ruhul Amin, 45, while the injured were Md Shahabuddin, 60, Abu Sufian, 48, and Monir Hossain, 25.

Sources said the oil tanker ‘MT Irabati-1’ remained anchored at the jetty of Super Petrochemical Limited on the south bank of the river Karnaphuli.

A fire broke out from an explosion at the engine room of the tanker at around 6:30am.

The fire left the duo killed on the spot and three others injured.

On receiving information, tug boats of Chattogram Port Authority (CPA), Bangladesh Navy and firemen of the Fire Service and Civil Defence (FSCD) department rushed to the spot and joined the fire fighting.

The bodies of Nizam and Ruhul were recovered from the engine room after extinguishing the fire, said the FSCD Deputy Assistant Director (DAD) Newton Das.

The injured were sent to Chattogram Medical College Hospital (CMCH) for medication, he said. Cause and extent of damages in the fire would be ascertained after investigation, he added.

Of the injured, Shahabuddin and Sufian were admitted to the burn unit while Monir was released after primary treatment.

Sources said the ‘MT Irabati’ came to Chattogram from Ashuganj of Brahmanbaria district with condensate. It was offloading the condensate at the jetty of Super Petrochemical.

However, the fire incident didn’t hamper movement of vessels through the port channel at that time, they said.