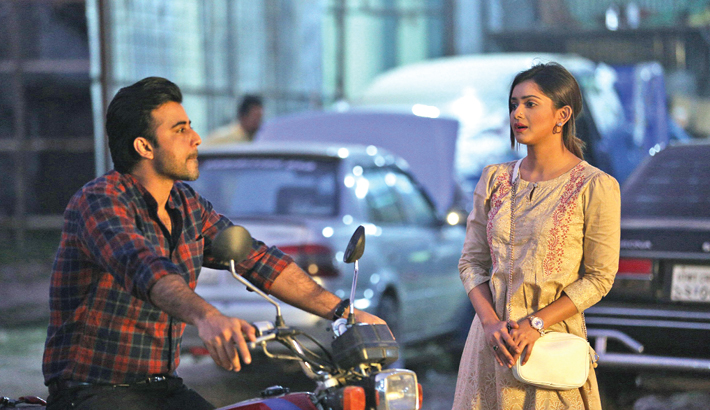 A scene from the drama ‘Take Bhalobasha Bole’

Mizanur Rahman Aryan is a popular television director and scriptwriter. He has directed more than 70 Dramas, telefilms and serial since 2012. Aryan is very selective in the way of making drama and telefilm. His first hit drama ‘Boro Chele’ which was released in 2017, has crossed 29 million views on YouTube and it is most viewed Bangladeshi telefilm in YouTube.

Recently, the talented director has made an Eid special drama titled ‘Take Bhalobasha Bole’. The shooting of the drama took place at different locations in the capital before the start of ongoing lockdown.

Written by Zobayed Ahsan, the audience-admired actors Afran Nisho and Tanjin Tisha will be seen acting in the single-episode play.

About the drama, Aryan said, “The drama has a unique storyline. The story is about an interesting journey for two people. It’s not just a romantic story. It shows friendship is big than love. The audience can feel that while watching.”

“Afran Nisho and Tanjin Tisha are two popular artistes in this time. They have tried their level best to portray their characters according to the script. The drama ‘Take Bhalobasha Bole’ is an Eid gift to the audience. I hope the viewers will enjoy it,” Aryan added.

‘Take Bhalobasha Bole’ will be released on CMV's YouTube channel on the occasion of the Eid-ul-Fitr festival.