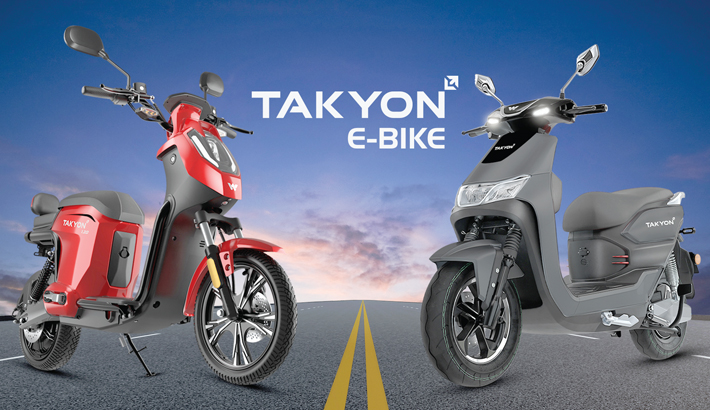 Walton Digi-Tech Industries Limited is going to introduce electric bikes or scooters soon in the market with the aim of delivering motor vehicles to the customers at low cost.

The e-bike named 'Takyon' will cost only 10-15 paisa per kilometer, said a press release.

The bikes will be marketed at affordable prices according to the purchasing capacity of the customers.

"We want to make domestic customers accustomed with electric vehicles through Takyon," he said, adding, "We have plans to set up fast charging stations across the country so that e-bike users can travel anywhere in the country without any hassle."

The e-bikes have portable charger which can be charged from the 220 volt power line used in residence while the performance of the bikes is equivalent to a conventional 100cc bike.

Walton officials said that there is no alternative to bikes to facilitate public transportation.

Using Walton e-bikes, 50-60 km can be travelled on a single charge which will cost only 7-8 taka whereas the same distance need one liter of octane which costs 89 taka.

This bike can run 60-70 kilometers with a maximum speed of 50 kilometers per hour once fully charged, he added.

Takyon 1.20 model features powerful motor of world’s top motor manufacturer BOSCH while its portable lithium battery weighs only 9 kilogram, said Siddiquie, adding, "The bike can cover a distance of 50-60 kilometers on a single charge with the maximum speed of 45 kilometers per hour."

Deputy Managing Director of Walton Digi-Tech Industries Limited Engineer Liakat Ali said, "We are striving to build a green universe and to create awareness among consumers on e-waste, we conducted laptop-desktop exchange campaign which has been well accepted.

"E-bike project is our another initiative to that endeavor," he added.

Customers of Takyon e-bikes will get free after-sales service for up to 2 years from Walton’s designated service points.