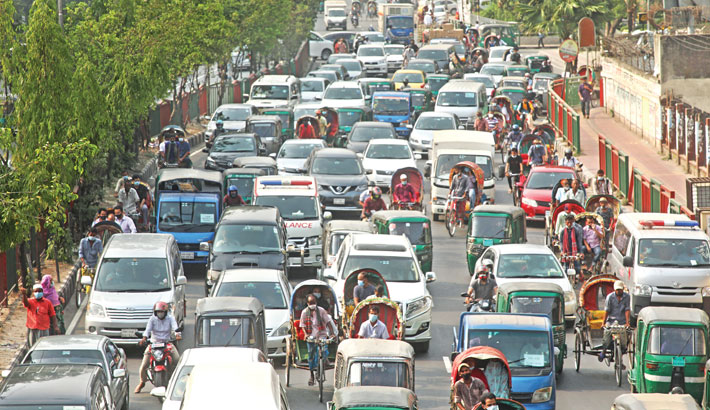 All modes of vehicles except buses are plying streets of the capital during the ongoing lockdown. In the photo taken from the Science Laboratory crossing, vehicles are seen stuck in a tailback on Wednesday. — sun photo

Despite surge in coronavirus infections, people are still least bothered about the lockdown as streets, markets and shopping malls are witnessing huge crowd in the capital and elsewhere in the country.

People are crowding kitchen markets both in rural and urban areas in violation of the health guidelines amid the lockdown enforced to check the spread of the deadly coronavirus.

Although maintaining social distancing and wearing face masks are important to stay safe from the highly contagious virus, people are still not giving a damn about the health rules.

Most of the people in the country are reluctant to wear face masks and maintain social distancing as the agencies concerned lack efforts to make them go by the lockdown, many alleged.

People without face masks are found on footpaths, shopping malls, kitchen markets and even small vehicles in large number are plying streets in the capital and elsewhere in the country.

Besides, people are gathering around tea stalls at street corners and shopping malls in Dhaka and other districts and thus they are facing the risk of corona infection.

According to global and national health experts, maintaining social distancing is one of the most important ways to stay safe during corona pandemic.

In the capital, the number of private vehicles, such as cars, microbus, auto-rickshaw and rickshaws plying the city streets saw a significant rise on Wednesday.

Pressure of vehicles on the city streets was reported from areas like Mirpur, Gabtoli, Shyamoli, Badda, Malibagh, Mouchak, Uttara and Mohakhali amid the lockdown, which has been extended by another week to deal with the worsening corona situation.

In a circular issued on Friday last, the government allowed reopening of shops and shopping malls from 10:00am to 8:00pm, prompting many to return to the capital city.

Though movement of rickshaws on the main roads in the capital was lower on Wednesday than other few days, these slow-moving vehicles were found running in alleys.

However, no public transports were seen on the city streets. Many rickshaw-pullers were charging passengers fare double the normal fare taking advantage of the situation.

Traffic congestion were also been seen at many police check points. As a result, employees engaged in emergency services are not able to reach their workplaces on time.

Traffic inspector Akhter Hossain said, "Pressure of vehicles is increasing on the streets.  But we did’nt see such situation during the last few days since the start of the strict lockdown on April 14.

“Reopening of shops, markets and shopping malls has caused pressure of vehicles on the streets,” he added.