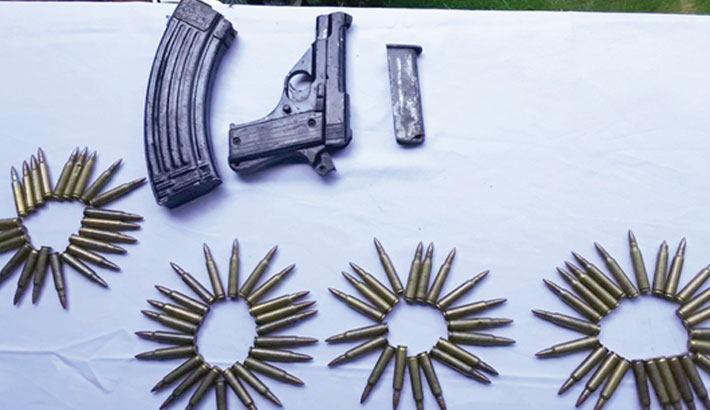 Bangladesh Army seizes huge arms and ammunition during a raid on a terrorist den in Bandarban district on Wednesday. – ISPR PHOTO

Bangladesh army on Wednesday recovered a large number of arms and ammunition from a terrorist hideout in Bandarban district.

The team of Bandarban Army conducted the operation in Noapatang area of Roangchhari upazila of the district on Wednesday morning, according to an ISPR press release.

An army operation team conducted a special operation in the remote area of Noangtang, Roangchhari after receiving information of the hideout of ParbatyaChattagram Jana Samhati Samiti (Santu) armed terrorists.

From that hideout, the terrorists wanted to establish a reign of terror in the area by carrying out extortion and terrorist activities for a long time.

Sensing the presence of the army during the operation the terrorists fired and fled into the deep forest. The army also fired back.

However, it was not possible to detain anyone from the spot. After recovering weapons and equipment from the spot, the terrorist hideout was destroyed.