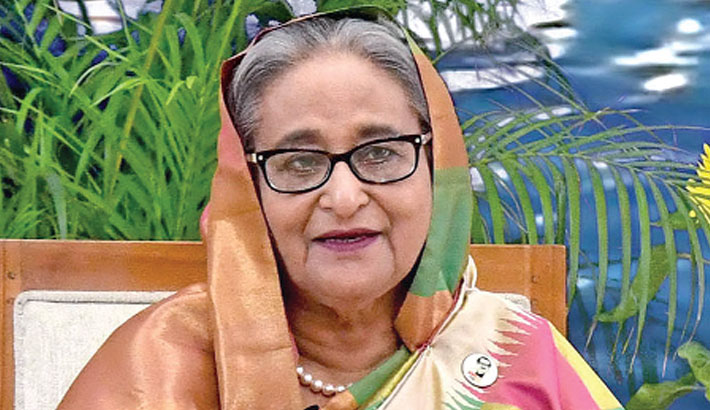 An EU-accredited non-profit think tank has lauded Sheikh Hasina government’s “robust” handling of terrorism and religious extremism in Bangladesh while ripping into Pakistan, saying its Muslim-majority neighbour has "encouraged, sheltered and promoted extremists and terrorists".

The European Foundation for South Asian Studies (EFSAS) in a commentary has shed lights on the rise of radical Islamist groups Hifazat-e Islam Bangladesh (HIB) and Tehreek-e-Labbaik Pakistan (TLP) in recent years, which has become the cause of a concern of the governments in the region.

Both organisations have proceeded against government decisions with violent and deadly protests.

In Bangladesh, a spree of arrests of top Hifazat leaders has prompted the organisation to dissolve its central committee in an apparent move to appease government anger after protests against Indian Prime Minister Narendra Modi’s visit.

But in Pakistan, TLP succeeded in forcing the government to debate its cause in parliament after protests demanding the expulsion of the French ambassador for the publication of the caricatures of the Prophet Muhammad in France.

“It is evident that while Sheikh Hasina has been making noticeable progress in dealing with the radical Islamist HIB, Pakistan has floundered dramatically in its inconsistent, ill-considered and ill-implemented attempts to pacify the TLP,” EFSAS said in the Apr 23 commentary headlined, "Bangladesh and Pakistan: acting against extremism versus making a show of acting against extremism”.

Prophet Muhammad’s cartoons in a class in October last year, thousands took to the streets of Bangladesh and Pakistan in protests organised by Hifazat and TLP against French President Emmanuel Macron’s comments supporting liberal views on religion.

Citing a TLP spokesman, Reuters reported that the political party called off the protests on Nov 17 after Imran Khan’s government signed an agreement that it will officially endorse boycotting the French products.

At the same time in Bangladesh, the police thwarted thousands of Hifazat activists from marching towards and laying a siege to the French embassy in Dhaka. The protests later wore off.

But TLP did not let go. Earlier this month, Pakistan banned the party declaring it a terrorist outfit after the killing of at least four police officers in clashes. At least 11 officers were at one point taken hostage.

Finally Pakistan’s government caved in and its parliament last week began debates on a resolution calling for the expulsion of France’s ambassador.

France had to advise its citizens to temporarily leave Pakistan and warned of serious threats to French interests in the country at the time.

“The resolution proposed by the government illustrates how deeply unsettled Prime Minister Imran Khan’s administration feels amid a reeling economy, a new wave of coronavirus infections and spreading social unrest. It also suggests the party, Tehreek-e-Labaik Pakistan, which has capitalized on public anger over the publication of caricatures depicting the Prophet Muhammad in France, could pose a major threat to Pakistan’s stability,” The New York Times reported.

The protests intensified after the government arrested Saad Hussain Rizvi, the party’s 26-year old leader, in a preemptive move to scuttle his calls for large gatherings.

The TLP draws its support from the Barelvi school of Islam, to which a majority of Pakistanis belong.

Hifazat in Bangladesh is based on Qawmi madrasas that give lessons on the basis of the principles of Deoband school of Islam, based at Darul Uloom Deoband madrasa in India.

“Hifazat-e Islam launches programmes now. Don’t they go to Deoband for education? How do they go to Deoband if they carry out such incidents? Have they thought about it?” Hasina asked in parliament after the violence during anti-Modi protests by the end of March.

The protesters objected to Hindu nationalist Modi joining the celebrations of 50 years of Bangladesh’s independence from Pakistan and the birth centenary of Bangabandhu Sheikh Mujibur Rahman, who founded the nation with a vision of non-communalism.

The government headed by his daughter Hasina seemingly resorted to playing patience during the celebrations and simultaneous violent protests apparently to avoid more embarrassment.

Finally, the law enforcers launched a crackdown on Hifazat, arresting its top leaders and supporters for the violence.

Hifazat leader Mamunul Haque, who had threatened to tear down Bangabandhu’s statues claiming they are forbidden in Islam, is now facing grilling in police custody over a raft of cases.

The police are trying to establish Mamunul’s links with Pakistani terrorists and a political party, possibly the TLP, from information he revealed in interrogation and those found in investigation.

The extremist leaders want to turn Bangladesh into a country like Pakistan or Afghanistan by establishing Hifazat as a group like Pakistan’s Tehreek-e-Labbaik, said Mahbub Alam, a joint commissioner of the police’s Detective Branch.

Mamunul and his brother-in-law Maulana Mufti Neamat Ullah had travelled to Pakistan in 2005 and contacted militant and political groups during a 45-day stay there, said Harunor Rashid, a deputy commissioner of Dhaka Metropolitan Police.

Neamat had also been arrested over the Aug 21, 2004 grenade attack on an Awami League that targeted Hasina, but later walked free, according to the DC of DMP.

Despite Hifazat being a so-called apolitical group, Mamunul “has political ambitions”, said Harunor. “He had been thinking about grabbing power with the help of (Jamaat-e-Islami).” Mamunul is also the acting secretary general of political party the Khelafat Majlish.

In the wake of the arrests of a number of Hifazat leaders, some of whom are also leaders of Khelafat, Hifazat dissolved its central committee on Apr 25.

The education board overseeing the Qawmi madrasas announced a ban on politics by the students and teachers of the institutions the same day in an apparent bid to distance themselves from accusations that Hifazat tried to grab state power despite being an “apolitical” group. Hifazat leaders are often accused of using innocent young students in violent protests.

Its chief Junaid Babunagari, who had strongly supported Mamunul, however, has remained the Amir of a new five-strong convening committee with his uncle Muhibullah Babunagari as the convener, leaving questions about whether they will shun the same path the TLP is forcing Pakistan into.

The EFSAS commentary highlighted the stark contrast in “the attitudes and the policies that the two Muslim-majority countries have chosen to adopt vis-à-vis terrorism and extremism”.

“Bangladesh, without doubt, has had periods in its 50-year existence when it encouraged, sheltered and promoted extremists and terrorists. That is especially true of the earlier phase, when remnants of Pakistani influence lingered.

“However, the past decade under the leadership of Sheikh Hasina has seen the country pursue a robust and consistent anti-terror regime. Pakistan, on the other hand, has displayed a dogged and persistent determination to remain closely engaged and aligned with terrorists and extremists of various hues.

“Events over the past week have brought the widely divergent attitudes of the two countries to the fore, and these events need to serve as a reminder to the civilised world that their anti-terror focus and pressure on Pakistan must not cease.”

The Amsterdam-based policy research institution seems confident that the Hasina government can tackle the situation from here.

“Bangladesh under Sheikh Hasina genuinely wants to counter terrorism and extremism and therefore succeeds most of the time in doing so. Pakistan, in contrast, almost always seeks to hedge its bets. It is more keen on giving the impression that it is acting against the twin menaces, while what it actually does is dabble in the same dangerous pastimes that the extremists and terrorists do, more often than not together with them, hand in glove.

“Pakistan, consequently, lacks the moral conviction and authority to fearlessly counteract terrorists and extremists, something,” concludes EFSAS, effusively, “that Sheikh Hasina’s genuineness of purpose empowers her in ample measure to do with great efficacy.”