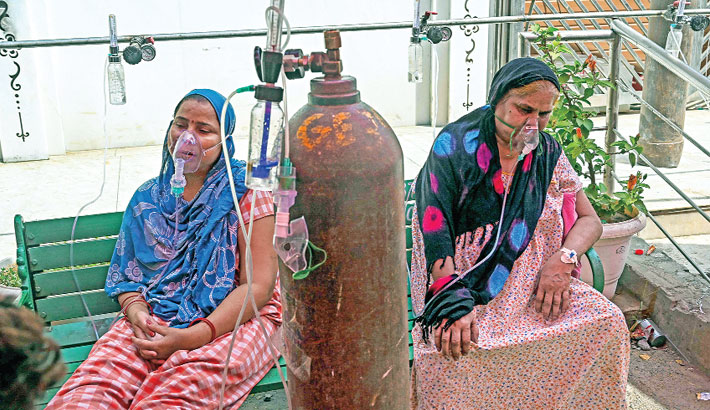 Coronavirus patients breathe with the help of oxygen provided by a Gurdwara, a place of worship for Sikhs, under a tent installed along the roadside in Ghaziabad, Uttar Pradesh, on Wednesday. – AFP PHOTO

GHAZIABAD: Himanshu Verma sighed in relief as a mask was fitted over his mother’s face, allowing the Covid-19 sufferer to breathe in oxygen as she sat alongside a busy road on the outskirts of New Delhi.

As record infections spark severe shortages of the gas in hospitals, desperate patients are flocking to a tent outside a gurdwara—a Sikh place of worship—in Ghaziabad city, arriving in cars, rickshaws and even ambulances.

“We needed treatment but we couldn’t find any beds in Delhi’s hospitals,” Verma, 32, told AFP as his mother, 58-year-old Poonam, was connected to an oxygen concentrator.

“We will stay here all night if we have to. We don’t have any other options.”

Around him, people stricken with the infectious disease gasped for breath as they lay on benches and in the back of rickshaws.

Anxious family members fanned them with pieces of cardboard as temperatures soared to a sweltering 38 degrees Celsius (100.4 degrees Fahrenheit).

“We are getting more cases day by day,” said 28-year-old Ishant Bindra, a volunteer with Khalsa Help International, an NGO set up by the gurdwara.

The World Health Organisation has estimated that about one in five people with Covid-19 suffer from respiratory distress and need oxygen therapy.

Patients have died outside hospitals, gasping for air, as they wait to be admitted.

In some places, even those who managed to get in then reportedly died due to the facilities’ low oxygen supplies.

Some families said on social media that they were asked by hospitals to source their own cylinders.

Twitter and Facebook have been flooded with frantic appeals for places to buy tanks and refills, often alongside readings of dangerously low oxygen levels in the blood.

Priyanka Mandal, 30, said she wasn’t able to get her 55-year-old mother Pushpa, who suffers from diabetes, admitted to a hospital after her condition deteriorated. She eventually found someone willing to sell her a cylinder and six kilogrammes (13.2 pounds) of oxygen for 30,000 rupees (US$400) -- far higher than usual market prices.

“She’s been having constant fever and now she’s not able to breathe,” Mandal told AFP, adding that their oxygen supply was running out.

The gurdwara has also struggled to refresh its stock, a reflection of the severe crunch gripping Delhi even as medical supplies arrive in India from international donors.

Volunteers fan out to other cities up to several hours’ drive away, looking for places willing to fill the cylinders.

But on Tuesday, as night fell, it was still trying to refill its empty ones as it supplied oxygen to waiting patients via an oxygen concentrator, which produces oxygen from ambient air.

Wearing full protective gear, volunteers cleaned pressure gauges and pipes as they waited for the full cylinders of the life-saving gas to arrive.

“No matter how much time it takes, I have to wait here,” Mandal said.

“I only have my mum, I don’t even have my dad now... as I lost him in a road accident. So I have to help her survive.”