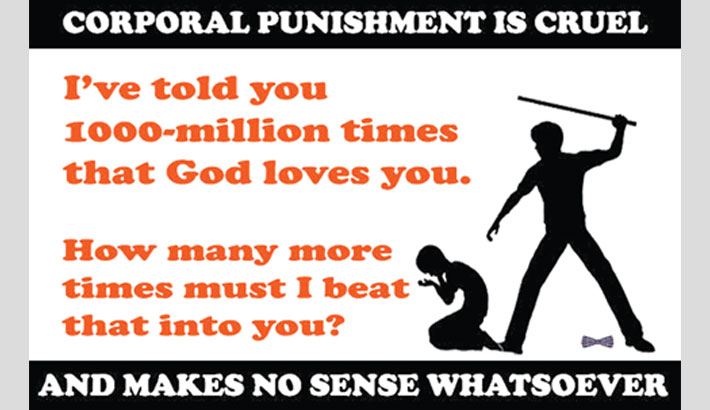 Frank: Corporal punishment is associated with children's aggression and other antisocial behaviour (towards peers, siblings and adults. The damage corporal punishment can have on children can range from mild to suicide and all the pain, hurt, suffering, sorrow and tears in between.

While insults catapulted at a child by a ‘teacher’ to a child might be like water off a duck’s back to one; it could cause deep psychological effects to another, making them feel unwanted, unloved and of lesser value, if not entirely worthless. That may lead them to the edge where they ask themselves, why go on living?”

A recent report by the University of Manitoba, for example, stated: “Children who are given corporal punishment in school or in the home, spanked, slapped, grabbed and pushed, shoved, kicked, beaten with a cane or any other means of physical punishment, may be at an increased risk for developing mental problems later in life and it may cause mood and anxiety disorders or lead to alcohol and drug abuse.

Sun: Corporal punishment was banned by a High Court ruling in 2011. Why do you think it has not been enforced effectively?

Frank: Only the Government can answer that question.

Maybe they thought that a circular would be enough. They could make the circulars more effective by adding that in addition to criminal prosecution, departmental proceedings shall be taken against the perpetrator and that will be kept on his service record.

The High Court Division suggested that in the judgment parents withdraw criminal proceedings, but departmental proceedings can continue. This would be the best deterrent.

Now that the honourable Prime Minister Sheikh Hasina, the mostpowerful woman in the history of Bangladesh and Asia, has set her focus on the needs of children, I’m hoping things will change rapidly.

The time will come, and I do not envisage that being too far away, when the government will be bold and set its priorities straight and don’t mind on whose toes it walks.

Sun: What are the alternatives to corporal punishment?

Frank: When there’s respect, most of the regular problems go out the window. There’s no need for corporal punishment.

A look of disappointment (perhaps a slight shake of the head added for emphasis) or an eyebrow raise from a respected teacher speaks volumes in silence. It’s interpreted to mean: ‘I’m disappointed by your attitude’.

Nobody wants to disappoint those whom they love, admire and respect. It’s implanted in nature. Most mothers fall into this category. Very few children would intentionally disappoint their mothers.

Put a child in a happy environment and the academic results will be astonishing. It’s a scientific fact happy children learn faster and retain more. Show children appreciation for their efforts and it does wonders for their esteem. To tell a child his work is low quality or no good is negative, destructive, and serves no useful purpose.

To tell a child, ‘hey, that’s not a bad effort, but I think you could do much better’ has magical powers.

Sun: What is the difference between corporal punishment and physical abuse, if any?

Frank: Any form of corporal punishment from even the slightest slap to the body of another person IS physical abuse and, in some cases, it is assault and bodily harm, and grievous hurt in some cases according to the Penal Code. When there is prima facie evidence of a cognizable offence, then police must prosecute!

Sun: What can be effective ways to stop madrasas from abusing the children, how can we change the views of the teachers and guardians?

Frank: First and foremost, the education system itself needs to be viewed under a magnifying glass and changes made. There are people within the system who do not qualify as teachers and have never gone through teachers’ training. This has to be stopped. A brown envelope to the local government representative or headmaster, or someone in need of a job, does not qualify anyone to become a teacher. If there is a major shortage of qualified teachers, then open more training schools and the problem will resolve itself five years hence.

At the beginning of the school year the mother, father or both should go to the school accompanied by their child/children. Introduce themselves to all the teachers who will be involved with the education of their children. Offer the teachers their support and make it very clear they are against corporal punishment and never want their child to be hit. If there’s a problem at school to telephone them and they will resolve the issue in the home.

If the ‘teacher’ fails to uphold his end of the agreement, the father (preferably) should go to the school, meet with the errant teacher, and remind him of his agreement. Generally, it needs to be done only once.

This also tells the child he is not alone. He/she is loved, protected, and can rely upon the parents for support if/when needed.

Sun: When being beaten children may not have the power to fight back, or their words may be dismissed. What initiatives should be set in order to help the children?

Frank: Everyone has power, but many don’t use it.

When Supreme Court Justices Md. Imman Ali and Md. Sheikh Hasan Arif outlawed corporal punishment in schools and madrasas throughout Bangladesh in 2011, I gave a talk to group of youths advising them of their new rights.

Some days later one of the boys, Rajowl Karim, was called to the front of the class to be given corporal punishment and he announced to the teacher it was against the law. Rajowl was told to sit down and nothing more was said!

Another boy who was badly beaten by a ‘teacher’ came to me for help. I advised his father to go to the school, face the ‘teacher’ and tell him it’s against the law and never to do it again. The boy never had a bad experience after that.

If you do not assert yourself, some people will walk on you. It’s important to speak out. People are only powerful if you give them your consent.