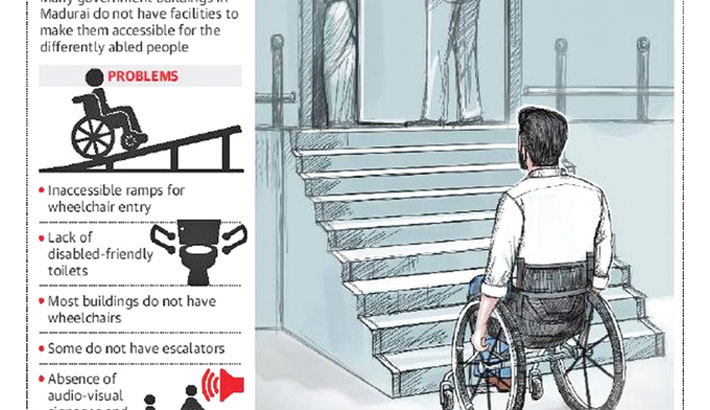 The 14th World Autism Awareness Day was observed across the globe on April 2. Similarly, the World Disabled Day is being observed worldwide on December 3 since 1992. Though technically or terminologically people use the term “disabled”, nobody is disabled in the true sense of the word. Everyone is able in some way or other. So, the term “disabled” should be turned into “differently-abled”. It is a humane concept, the modern concept, the twenty-first century concept.

Let us give examples. According to a newspaper report, a student named Manju with deformity in his hands, has taken part in the JSC exam writing in the answer script with his legs. I have heard about other students who appeared at various public examinations writing in the answer script with their legs or mouths because of disability in hands. According to another report, a youth named Iakub of Naogaon’s Manda upazila has no hands. Even his legs don’t work. But, he can draw pictures with his mouth. And what is a picture? Nothing but a wordless poem.

All these things do testify to the fact that inability in using traditional skill can be turned into or transformed into a different skill if the student is motivated and trained properly. Wolfgang Amadeus Mozart (one of the greatest musicians of the world), Albert Einstein (the most renowned scientist in history), Anthony Hopkins (The Academy Award winning actor) are examples of many who were diagnosed with autism, but were able to carve out successful careers for themselves. They are inspirations for autistic children throughout the world.

The tenth of our whole population are so-called disabled, out of which about 30 lakh people are visually impaired. And there is no denying many of the differently-abled students are enrolling in different primary, secondary, higher secondary and ‘varsity level. There are also some institutions which are specially made for differently-abled children. Our education-friendly government believes in inclusive education.

The so-called disabled students are not the burden of any school or any educational institute. Everyone should be co-operative, sympathetic, empathetic towards a student with ASD, cerebral palsy, down syndrome, ADHD or any kind of physical or mental disability.

But, sometimes it is seen that other students and teachers are co-operative, sympathetic, empathetic towards a so-called disabled child, but parents are still in the clutches of the wrong mindset of treating their own biological child as a ‘burden to the family’. They arrange day care education or full-time residential education for the child only to think that they have done their every responsibility.

In every public university, some students with these kinds of disabilities are getting admission every year. I know about a blind student who passed LLM from Dhaka University and now he is lawyer. I know about a student of Rajshahi University whose name topped the list of successful students in BCS (general education) in Philosophy. A philosopher of this subcontinent has told “Where varieties arrive with a meaning at unity, this is university”. So every university and every educational institute of Bangladesh embrace difference and they are “differently-abled friendly”.

Ours is a democratic and a “rainbow” society. Unity in diversity is the motto of the modern society. We are fortunate that with the adroit, farsighted leadership of Prime Minister Sheikh Hasina, we are heading towards a knowledge-based society. And her accomplished daughter Saima Wazed Hossain Putul, a world famous autism specialist, is our continuous inspiration to go ahead with the idea of inclusive education. She has been working relentlessly since 2008 for developing the condition of autistic children. She is being invited as a specialist by the UN in the Autism Awareness Day celebrations since 2012. In 2017, she was nominated as a champion on autism by the WHO. So, there is no denying the fact that Saima Wazed Hossain Putul has been the light house in our country and also throughout the world to go ahead with the positive changes with autism. Saima Wazed Hossain Putul, autism and the world are now inextricably interwoven. Dr Hakim Arif, the pioneer with a galaxy of luminaries in the arena of imparting education on Communication Disorders, is making Speech and Language Pathologists. It is contributing a lot in the journey of ensuring inclusive education in Bangladesh. To echo the idea of Rabindranath-

Should be given language,

If they are given voice”.

The writer is pursuing PMSLP in the Department of Communication Disorders, Dhaka University