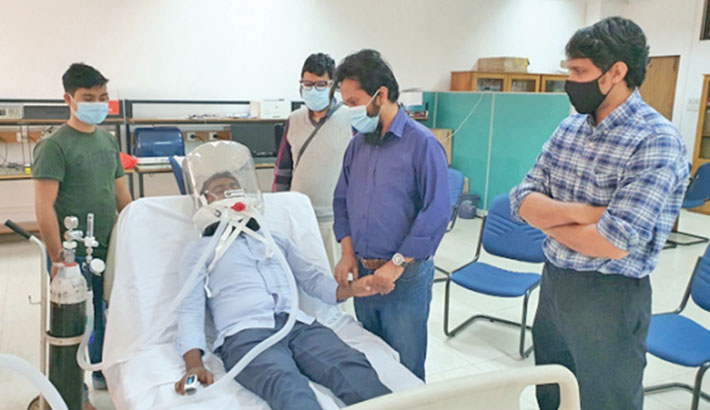 BUET-made Oxyget C-PAP ventilator which is designed to help critical coronavirus patients undergoes trials at BUET lab in the city.

A group of students and teachers of Biomedical Engineering Department of BUET has invented the ventilator after a 10-month research, said a press release.

The group took the initiative after the country was hit hard by the coronavirus pandemic that claimed over 11,228 lives so far.

The device will work without electricity and it can supply 0-15l/min oxygen to patients. The device can be used by connecting it to oxygen cylinder or oxygen line in hospital. Even it can be used in ambulances on the way of hospital from the country’s remote areas, the release further said.

During the first phase of the clinical trial, it worked effectively when it was used on five healthy people.

Later, its effectiveness was checked by applying on five hypoxemic patients in Dhaka Medical College Hospital (DMCH). In the second trial, oxygen saturation level has increased by 11.2 percent within an hour.

Now, a delegation consisting of Bangladesh University of Engineering and Technology (BUET) and physicians of DMCH are

working for the third phase of clinical trial.

The third-phase trial will be conducted on 40 patients randomly to check its effectiveness.

As per the press release, manufacturing work of some 50 Oxyget C-PAP is going on to run large-scale clinical trial after getting approval of Bangladesh Medical Research Council.

Research assistants of BUET Biomedical Engineering Department Mimnur Rashid, Kawsar Ahmed and Farhan Muhib along with assistant professors of the department Kaiser Ahmed and Saidur Rahman were involved in making Oxyget C-PAP ventilator under the supervision of Taufiq Hasan.