Relocation may be delayed further 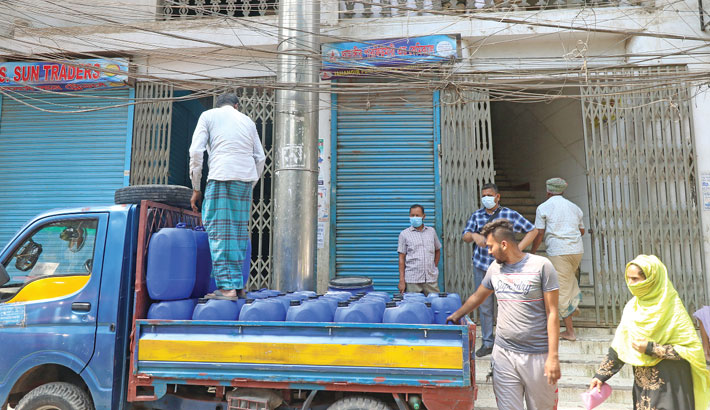 Although most of the chemical warehouses in Old Dhaka keep their shutters down following the recent devastating fire at a store in Armanitola, the sale of the substance continues as usual. In the photo taken from Armanitola on Tuesday, workers are seen loading drums of chemical into a van from a warehouse. —MD NASIR UDDIN

From Nimtoli in 2010 to Armanitola in 2021, fire tragedies caused by hazardous chemicals took more than 200 lives in the last 11 years in Old Dhaka but the chemical warehouses are yet to be shifted from the crowded part of the city.

The government promised to shift the warehouses by June 2022 but now officials concerned are saying that it might take longer as the work of the chemical village project in Munshiganj could not make expected progress.

The chemical village project was supposed to be completed in June 2022 but with only one year in hand, only one-third of the project has been completed.

Sources said the development work of Chemical Palli started in April 2019 on some 308.33 acres of land in Munshiganj on the bank of Ichamati River with a budget of Tk 16.15 billion.

In October 2018, the Executive Committee of the National Economic Council (Ecnec) approved the project at an estimated cost of Tk 2.01 billion. The project was supposed to be completed by June 2021. But it was shifted to Munshiganj after a revision.

Talking to the Daily Sun, Project Director Md Saiful Alam said, “We have completed some 34 per cent work of the chemical village. We have completed the tender of earth filling on low land and it will be completed within the next six months.”

A fire station will be set up in the project area.

Md Saiful Alam said they might need an extension of the time for completing the work as the project work was affected by Covid-19 pandemic.

“Though we may need time extension we don’t need to revise the budget of the project,” he added.

Under the project, the government will prepare around 2,200 plots and allocate those plots for 10 years. Chemical traders will develop the infrastructure for their warehouses.

He said that the government has taken an initiative to shift the business in Shyampur and Tongi temporarily with a total capacity of housing 107 warehouses but they have 1500 registered members as of now.

DSCC sources said there are more than 2,000 chemical warehouses in Old Dhaka and all these businesses are running without trader license since 2010.

Residents of Old Dhaka said almost all of the business is running in the residential buildings in violation of rules but no legal steps have been taken against them.

DSCC Chief Executive Officer ABM Amin Ullah Nuri said, “We have nothing to with this matter. We have kept issuance of trade license suspended since 2010. What else we can do as the government is trying to shift them under a project.”

DSCC conducted some drivers and disconnected utility services after the Chawkbazar tragedy but the authorities were forced to stop the drives.

If we evict them right now the industry might collapse completely, he also said.