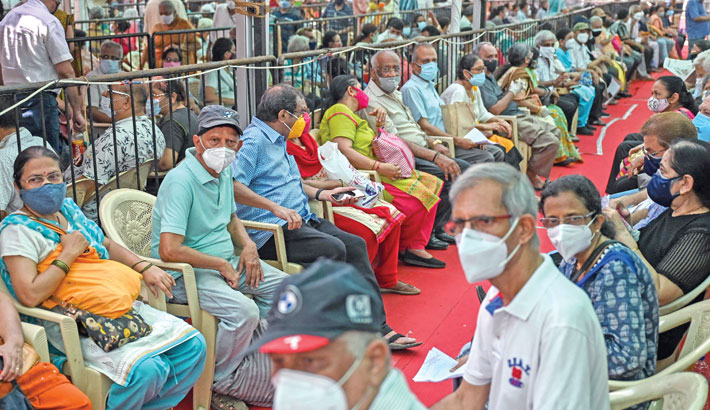 People queue up to receive a dose of a Covid-19 coronavirus vaccine at a vaccination centre in Mumbai on Tuesday. – AFP PHOTO

NEW DELHI: The Delhi crematorium where Sanjay acts as a priest is dealing with so many bodies from India’s Covid nightmare that it has been forced to expand into an adjacent car park.

“I have lost count,” he told AFP of the number of dead brought to the facility.

“We start at sunrise and cremations continue past midnight,” he says next to burning pyres and smouldering piles of ash.

Families mourn silently on the roadside of this low-income neighbourhood as they wait the turn of their relatives wrapped in white cloth and garlands of yellow marigolds.

Wailing ambulances regularly bring more bodies. People in homes overlooking the crematorium live with the stench of burning bodies and the cries of grieving families.

India’s hospitals are being stretched to breaking point by an explosion in coronavirus cases with people dying outside their doors or at home due to a lack of beds, drugs and oxygen.

Crematoriums are working overtime, their chimneys cracking and iron frames melting from constant use. Wood is reportedly in short supply in places and some families are told to bring their own to burn.

Many crematoriums and graveyards say the official death toll from the virus comes nowhere close to reflecting the additional number of bodies they are dealing with.

For the past three days the crematorium in the Seemapuri area of northeast Delhi has been performing more than 100 funerals a day, and has run out of space.

“We tried to accommodate cremations on the walkways and wherever we could find space but the bodies were coming endlessly,” coordinator Jitender Singh Shanty, in a yellow turban, blue hazmat suit and lanyard, told AFP.

“We had to request authorities to allow us to extend the facility to the parking lot,” the Sikh says, orange flames licking up off pyres behind him as night falls.

Shanty says they have cremated around 600 bodies since the beginning of the month and that families now have to wait hours to perform the last rites.

“If things don’t improve then we might be forced to perform the cremations on the road as there is no space left now.”

India has recorded more than a million Covid-19 cases in just a few days.

The number of reported cases declined slightly on Tuesday, to 323,144 from the peak of 352,991 the day before, bringing the total number of Indian cases so far to nearly 17 million with 192,000 deaths.

However, it is thought the true figures are far higher - both for deaths and cases.

An investigation by television station NDTV found at least 1,150 extra deaths which were not included in Delhi’s official Covid count over the last week. Other investigations have found similar examples of undercounting replicated across the country.

Crematorium staff are working throughout the night, with relatives of the dead reportedly having to help with the cremations, piling wood and assisting in other rituals.

In Delhi, parking lots, parks or empty ground are now being sought for the increasing need for cremations. Families often have to wait for hours before they are allowed to cremate their dead.

At the capital city’s Sarai Kale Khan crematorium, at least 27 new platforms have been built, with 80 more being added in the park around the existing structure. Municipal authorities are also looking for additional spots near the city’s Yamuna river bed.