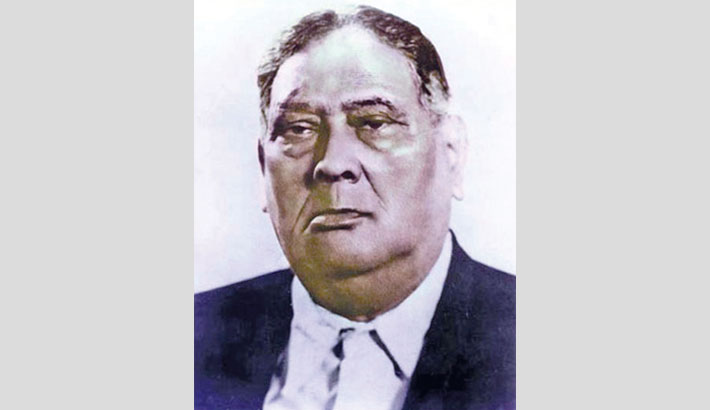 The 59th death anniversary of Sher-e-Bangla Abul Kashem Fazlul Huq will be observed in the country today in a befitting manner.

Awami League would pay tribute by placing wreaths at the grave of the late leader in the morning.

At the time Fateha and special doa would also be offered, reports BSS.

In separate messages, they paid glowing tributes to the late leader and recalled his struggle for economic freedom for the peasants and toiling people of this country.

They also prayed for eternal peace of his departed soul.

In his message, President Abdul Hamid said Sher-e-Bangla was an extraordinary talented political leader. As a seasoned politician and social activist, he worked for the welfare of the masses for more than half a century, he added.

Abdul Hamid said Fazlul Huq, as a chief minister of undivided Bangla, had an outstanding contribution to the development of every sector including

The President recalled different steps taken by Sher-e-Bangla, including the formation of the Debt Settlement Board, for the welfare of the repressed

and exploited farmers and the toiling masses.

The extraordinary personality and political wisdom and farsightedness of Sher-e-Bangla would remain as a model to be followed by the next generation,

In her message, Prime Minister Sheikh Hasina said Sher-e-Bangla had struggled throughout his life for economic emancipation of the peasants of this country.

She said because of his bold leadership, liberal and benevolent characteristics, the people dubbed him as Sher-e-Bangla or Banglar Bagh (Tiger of Bengal).

Abul Kashem Fazlul Huq, popularly known as Sher-e-Bangla or Huq Saheb, was born on October 26, 1873, at his maternal uncle’s house at Saturia, a prosperous village in the Southern part of the district of Bakerganj. But his ancestral house was at Chakhar, a village 14 miles away from Barisal town.