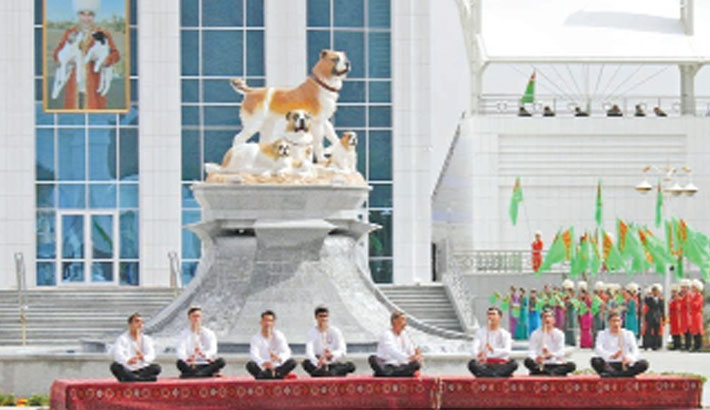 The Central Asian nation of Turkmenistan has been celebrating a new national holiday - dedicated to a very special breed of dog.

The Alabay - a native variety of shepherd dog - was honoured on Sunday with an awards ceremony, reports BBC.

President Gurbanguly Berdymukhamedov has encouraged veneration of the breed as a symbol of national heritage.

Sunday saw the dogs take centre stage in events designed to reinforce their lofty cultural status in Turkmenistan, a former republic of the Soviet Union.

The day’s event included a best-of-show competition in which a procession of Alabay dogs were judged on appearance and agility.

President Berdymukhamedov awarded the top prize for courage to a dog in the border guard service.

The award was presented by the president’s son, Deputy Prime Minister Serdar Berdymukhamedov. He appeared at the ceremonial opening of a new complex for the breeding of Alabay dogs in the country’s capital, Ashgabat, according to state media.

Alabay dogs are widely used by many traditional herders in Turkmenistan. They are among the world’s largest dogs, weighing up to 80kg (175lbs).

The city is adorned with similar monuments, including a gold-coated statue featuring Berdymukhamedov’s likeness atop a golden horse.

In power since 2007, Mr Berdymukhamedov is widely seen as an autocratic ruler who has built a personality cult. Turkmenistan is one of the least-free countries in the world, according to a survey by Freedom House.

Berdymukhamedov has occasionally given a horse or a puppy to leaders of allied nations. He was criticised for his handling of a dog he gave to Russian President Vladimir Putin after a video of the incident went viral in 2017.