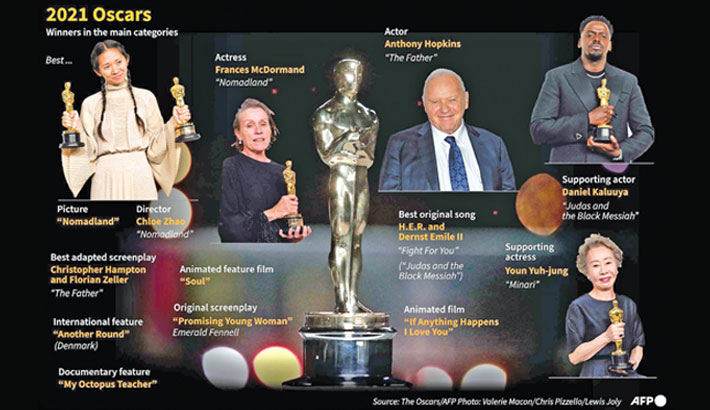 US road movie ‘Nomadland’ emerged as the big winner at the 93rd Academy Awards on Monday with three major prizes, including a history-making award for director Chloe Zhao, as  Hollywood celebrated its most glamorous night with a unique pandemic-era gala, reports AFP.

Zhao’s drama about marginalised Americans roaming the West in vans was honored for best picture, director and actress for Frances McDormand.

The unorthodox Oscars ceremony was moved from a Hollywood theater to a glammed-up downtown train station to abide by strict Covid-19 protocols, and reunited Tinseltown A-listers for the first time in more than a year.

Zhao, who is the first woman of colour ever honoured as best director, thanked “all the people we met on the road... for teaching us the power of resilience and hope, and for reminding us what true kindness looks like.”

Hopkins’ win at 83 for his shattering portrayal of a dementia sufferer in ‘The Father’ makes him the oldest actor to win a competitive Oscar in history.

‘Promising Young Woman’ won best original screenplay. Emerald Fennell, who was seven months pregnant when she shot the #MeToo revenge thriller, thanked her son who "did not arrive until a couple of weeks after shooting, thank God, because I was crossing my legs."

Netflix's ‘Mank’ began the night with the most nominations -- 10 -- but ended up with two wins in technical categories, as did ‘Ma Rainey’s Black Bottom’ and Amazon’s ‘Sound of Metal.’

The 93rd Oscars began with a movie-style opening credits sequence, as King strode into the venue clutching a gold statuette.

This year’s Oscars arrived at their Union Station venue two months late due to the pandemic -- organisers have said it would have been ‘impossible’ without the delay.

An honorary award for the Motion Picture and Television Fund, which has supported struggling actors and crew particularly during the pandemic, was awarded at the Oscars' traditional Hollywood theater base. Black entertainment mogul Tyler Perry was also honored.

But the bulk of the awards were handed out at the 1930s-built Union Station, chosen for its grand scale and outdoor courtyards, where white tents sheltering everything from Covid testing booths to catering were installed.

Oscars winners at a glance

International film: Another Round (Denmark).

Animated short film: ‘If Anything Happens I Love You’.