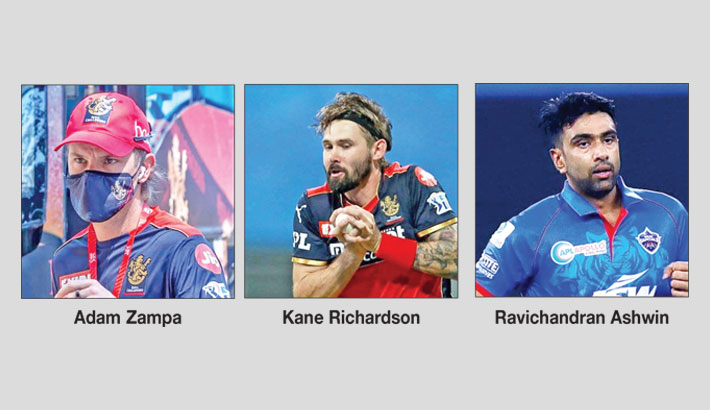 Two Australian cricketers became the latest to pull out of the IPL on Monday as India's devastating coronavirus surge increases jitters around the glitzy tournament.

India star Ravichandran Ashwin also withdrew to support his family on Sunday as India staggers under a daily toll of 350,000 infections and almost 3,000 deaths from the virus. The Indian Premier League has attracted criticism for continuing during the crisis, with a leading newspaper group accusing it of "commercialism gone crass" as it suspended coverage on Sunday.

Zampa and Richardson are "returning to Australia for personal reasons and will be unavailable for the remainder of #IPL2021", their team tweeted.

Tye, who flew back on Sunday, said other players had asked him about his return home. Flights to Australia are limited, and some countries have banned or restricted arrivals from India as its cases spike.

"Some of the guys are very interested in what route I took home and how I approached it," Tye told the SEN WA radio station. "Other guys are just happy to make sure I'm OK and make sure I'm in a good space."

Cricket Australia said it was in contact with IPL players, coaches and commentators and was listening to their "feedback" and advice from the Australian government.

"Our thoughts are with the people of India at this difficult time," a statement said.

"Continually I'm asking the boys at breakfast every day how's everything going on the outside? How's family? Family safe? Family happy? That's a really important thing," he said, according to espncricinfo.com.

"It is really important, we are thinking about the extended family, not just us, but we've got to be talking about what's happening outside because it is quite grim."

Kolkata Knight Riders mentor David Hussey said some players and staff had lost their fathers to the pandemic.

"Everyone's pretty nervous about what's going on over here, but they're also pragmatic," Hussey told Australian media, adding that players and staff were tested every other day.