Govt to change GDP base year 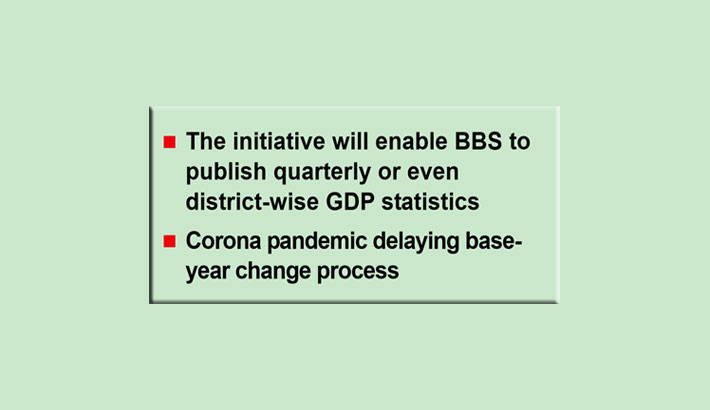 The government has moved to change the base year of GDP calculation from the existing 2005-06 fiscal to the 2015-16 fiscal to get the real picture of the country’s economy.

A base year is the first of a series of years in an economic or financial index. It is typically set to an arbitrary level of 100.

New, up-to-date base years are periodically introduced to keep data current in a particular index. Any year can serve as a base year, but analysts typically choose recent years.

The move comes as the current base year can not reflect the real picture of the economy because the Bangladesh Bureau of Statistics (BBS) lags behind in accounting management.

The new base year will be adopted under a project of BBS called: ‘Improvement of GDP Compilation and Rebasing of Indices,’ BBS sources said.

Usually, BBS publishes GDP growth rate and per capita income data once at the last quarter of a fiscal year and then final figures three-four months later. The practice sometimes becomes irregular.

For instance, BBS unveiled 5.24 per cent provisional growth figures for the last fiscal year, but the final estimate has not come even after six months.

BBS officials informed that once the project is complete the state statistics agency will be able to publish quarterly GDP growth data like the developed world.

At the same time, it will enable BBS to calculate rural-urban or even district-wise GDP data of the country.

BBS started the GDP rebasing initiative in March 2018 when the project was launched at a cost of Tk 98.6 million with a hope to complete the process by June this year.

But the project is not supposed to be complete within the stipulated time because of the corona pandemic that disrupted some project work.

So far, 58 per cent physical progress has been achieved with Tk 56.8 million expenditure. The cumulative progress stood at 80 per cent, BBS officials told at a recent meeting of the project’s steering committee.

The meeting was informed that Tk 9.15 million project money remained unspent in the 2019-20 fiscal year as a field-level survey under the project could not be completed

because of the Covid-19 crisis.

The distributive trade and market part of the agriculture product survey has been conducted by breaking it into two surveys considering the work volume.

Although field level activities of three and rebasing activities of one indicator surveys have been done complete, the project will require one-year extension to complete rebasing of five indicators, BBS officials said.

Under the project, systematic development is being done for changing of GDP’s base year and making it updated alongside estimating rural-urban GDP and factor income and developing a direct estimating method for savings and investment.

Two surveys are being done for expanding the GDP size—one is distributive trade and market part of agriculture product and another on cold storage and warehouse academy.

“It has been noticed that GDP size has increased 15 to 20 per cent after every change in the base year. We also expect the same this time as well,” Director of BBS’ National Accounting Wing Ziauddin Ahmed said.

“A lot of work has to be done for this. GDP base year is also being changed, which requires completing many things. All the work is being done gradually,” he informed.

Once these are complete, it will help the government take appropriate and efficient plans with more updated data, he expected.