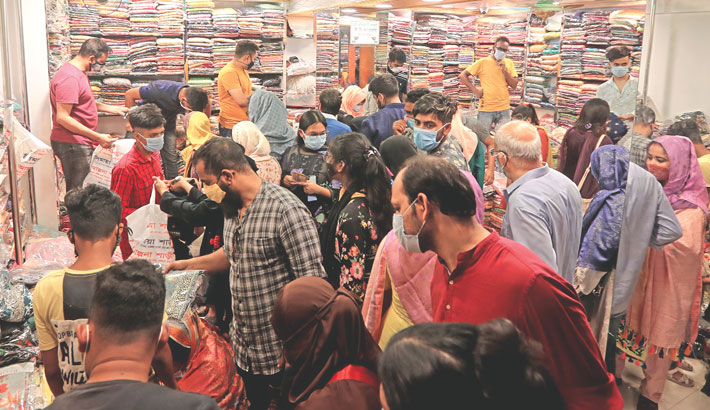 With the reopening of shops and malls, the movement of people and vehicles saw a sharp rise in the capital and other parts of the country on Sunday, the 12th day of the ongoing complete lockdown.

All stores and markets reopened in the morning across the country, including Dhaka.

Initially, shops and markets were allowed to operate from 10:00am to 5:00pm. However, the decision was revised on Sunday allowing them to remain open till 9:00pm maintaining health guidelines.

The government will take legal action if health guidelines are not maintained properly.

People were seen thronging different shopping malls in the capital in large lumbers to complete their Eid shopping.

They were still gathering around tea stalls at street corners and shopping malls in the capital and elsewhere in the country as they are hardly bothered about the virus, no matter how perilous it is.

Long traffic jams were also seen in different parts of the capital.

Traffic Inspector Akhter Hossain said, "The pressure of vehicles is increasing. But such pressure was not there during the last few days since the enforcement of the strict lockdown on April 14. This is happening following the government's decision to allow shops and shopping malls to reopen."

During the strict lockdown that began on April 14, the government closed all shops and markets across the country.

However, it allowed those to operate considering the livelihood of a large number of people engaged in the sector.

The 1st phase of strict lockdown started on April 14 and ended on April 21 midnight.

The 2nd phase started at 6:00am on April 22 and will continue till April 28 midnight.

A large number of people who went to their ancestral village homes before the countrywide strict lockdown came into force started returning to the capital.

Just ahead of the complete lockdown, people in their thousands, mostly lower-income groups, left the capital for their village homes.

They started returning as the government reopened the markets and shopping malls. People in large numbers were seen entering Dhaka on foot through Babu Bazar, Amin Bazar Bridge and Tongi Bridge points. The government kept the long distance buses off on the streets across the country from April 5 to fight the 2nd wave of coronavirus.

However, people were moving using small vehicles like private cars, microbuses and motorcycles. The adherence to health guidelines, including wearing masks and maintaining social distancing, was seen widely ignored at offices, roads and transport.