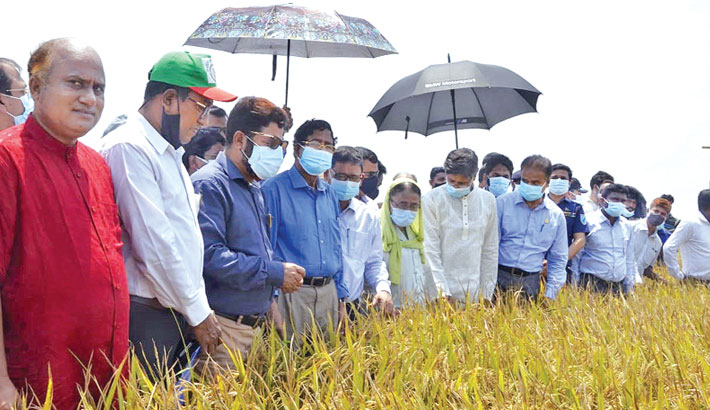 Agriculture Minister Dr Abdur Razzaque is seen at a boro paddy harvesting event at Mithamoin in Kishoreganj on Sunday.

Agriculture Minister Dr Abdur Razzaque said the government is planning to introduce a variety of paddy for haor region that can be harvested earlier than usual time.

He said the cultivation of early-harvest variety of paddy could reduce risk of being damaged in floods.

“A sufficient quantity of paddy is being produced in haor areas. This plays a very important to ensure food security of the country. But the floods pose risks. Crops are damaged in floods in some years,” the minister said.

Speaking at a boro paddy harvesting event at sadar haor in Mithamoin, Kishoreganj on Sunday, Dr. Razzaque said, “We are working to reduce this risk, giving emphasis on cultivation of varieties of paddy that can be harvested 15-20 days earlier.”

The labour crisis is also being considered and for this there are plans for quick harvesting of paddy, he added.

The minister said the boro paddy is the only crop grown annually in the vast haor areas and the productivity of this crop needs to be increased.

“Our scientists have already developed high yielding varieties of rice such as BRRI dhan 69, 92. We will give you these improved varieties of hybrid rice seeds. You will come forward to cultivate these,” he was addressing the farmers.

With Kishoreganj Deputy Commissioner (DC) Mohammad Shamim Alam in the chair, the event was also attended by Rejwan Ahmed Toufic MP of Kishorganj-4,  Nur Mohammad MP of Kishoreganj-2, Mesbahul Islam, Senior Secretary of the Ministry of Agriculture, Dr. Amitabh Sarker, Chairman of Bangladesh Agricultural Development Corporation (BADC), and other officials of the ministry.