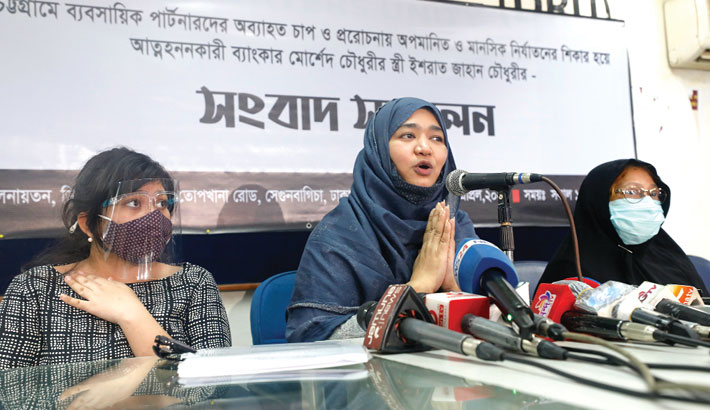 Alleging that her husband Abdul Morshed Chowdhury committed suicide after failing to withstand pressure put by a gang, led by Nazmul Haque Chowdhury Sharun, Ishrat Jahan Chowdhury has demanded punishment of those incited the bank official to take his own life.

Sharun and his accomplices exerted unbearable psychological pressure and harassment on Morshed, which forced him to choose the extreme path, she said.

Ishrat made the allegation at a press conference at Dhaka Reporters’ Unity (DRU) in the capital on Saturday.

They demanded arrest and punishment of Sharun and his associates for inciting Morshed Chowdhury to commit suicide.

“Although almost two and a half weeks have passed since my husband’s suicide, the culprits are still at large for some unknown reasons although there’s specific evidence against them. Instead, they’re putting pressure on me and my family in various ways,” Ishrat Chowdhury said.

She also feared that there might be attack on her life and property by the Sharun gang anytime.

On April 7, police recovered the hanging body of Morshed Chowdhury, manager of Agrabad branch of Bank Alfalah Ltd, from his flat in Nahar Bhaban in Hill View Residential Area of Chattogram city.

The following day, Ishrat filed a case against four named people bringing allegations of inciting her husband to take his own life.

At the press conference, the victim’s wife said she mentioned the names of four people and made 7-8 more people accused in the case.

Ishrat Chowdhury claimed that Sharun called her husband and asked him to meet him at Radisson hotel. “Raising objection to it, Morshed said ‘I have no dealing with you. Then why are you asking me to meet you?’ After hearing Morshed’s words, Sharun got very angry and said ‘there’s no transaction, it’ll happen now. If you don’t come, then I’ll come.”

“On that night in May 2019, a number of people with several cars came to the parking lot of our house. Sharun Chowdhury and Arshadul Alam Bachchu were sitting in a car. Parvez Iqbal and some others came to our flat and asked us to open the gate. But I didn’t open the gate and requested them to go away,” she said.

“Later on that night, they (Sharun and others) went to the house of businessman Azam Khan as Morshed was already there. Sharun broke the spectacles of my husband and assaulted him in front of Azam bhai,” the victim’s wife said.

As a relative, MP Didarul Alam wanted to mediate in the matter but it had not been possible because Sharun and Parvez did not turn up, Ishrat Chowdhury said.

Sharun and his friends continued to put pressure on Morshed, she said. “Sharun used his power to threaten my husband at different times and disturbed him mentally. This pressure forced him to take his own life.”

Morshed’s wife said they have not got any cooperation as the accused are very influential socially, politically and economically.

The Parvez-Shakib gang, Sharun’s business partners, gave a loan of Tk 25 crore to Morshed without any document for business purpose. In return, Morshed paid about Tk 38 crore, including interest.

Even then the nexus at one stage forcibly took Morshed’s signature on blank cheques and stamps. Taking the chance, they put pressure on the banker to pay more and more and also attacked his house.

At one stage of the torture, the bank official along with family members wanted to shift to Japan but the gang sensed the move and blocked their overseas trip.

“Morshed managed to secure Japanese tourist visas for us in September 2018. We’re indecisive then. We preferred to stay at home and were monitoring the situation,” Ishrat Chowdhury said.

“The opposite party came to know about it. Just two days prior to the flight, they took us to MM Palace (house of Abu Mohammad Mohsin). Morshed was inside the house while I was in a car. Later, they called me inside. The group said they will send me to Japan,” she said, claiming to have found her husband at gunpoint in that house.

Narrating the horrible story of that day, she said the gang asked banker Morshed Chowdhury to bring money from the vault of his bank as he has its key to resolve the crisis. “If you give us the money, we’ll allow you to go to Japan,” she quoted the gang as saying.

Ishrat alleged that the gang members also tortured her at MM Palace as she refused to give her mobile phone to them.

In 2019, an agreement was signed at the office of Deputy Commissioner (North) of Chattogram Metropolitan Police (CMP) when Morshed agreed to pay Tk 12 crore more. Then DC Bijoy Basak mediated in the matter and Bachchu and others were present at the meeting.

Posing a question, she said, “Can he (Bijoy Basak) do this as a man of law? He could have told him to go to court. If found guilty, Morshed would have been punished.”

She also said from then until Morshed’s death, Bijoy Basak used to decide how much money he needed to deposit in the bank. “On March 11 last, Bijoy Basak called Morshed and threatened to arrest him by sending police to his home and bank.”

She alleged that even after paying the principal and interest, Jubo League leader Russell kept pressing over the telephone for more money. “Morshed committed suicide a day after Russell threatened him over phone on behalf of Parvez and Jabed. That’s why Russell was made accused in the case.”

Morshed’s mother Nur Nahar said, “I’ve raised my four children going through immense sufferings. My two sons had their own happy family. Morshed’s death has left his family as well as my other son in emotional distress. He too had to flee because of Morshed’s suicide instigators.”

Victim’s daughter Zoom said, “My father was my best friend. My dad was horribly tortured for which he committed suicide. I want justice. I want the intervention of the Prime Minister.”

Referring to his last conversation with his father, she said, “I was at Nanubari. Papa last spoke to me in a video call. Then he forbad me to worry and said ‘I will bring you back home tomorrow’.”

Sharun lends his ill-gotten money to businessmen through others and uses his political clout to realise huge amounts in capital with interests.

The bank official failed to buy relief from Sharun even after paying around Tk 38 crore against a loan of Tk 25 crore. He had to choose the path of suicide failing to bear the political and administrative pressure.