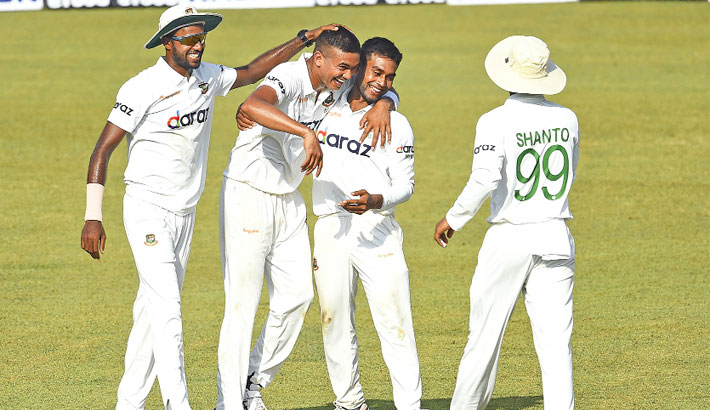 Bangladesh pacer Taskin Ahmed (second left) celebrates with teammates after taking a wicket against Sri Lanka on the third day of their first Test at Pallekele International Cricket Stadium in Kandy on Friday. —SLC PHOTO

Bangladesh left-arm spinner Taijul Islam said on Friday that they need to be more disciplined if they want to earn success against Sri Lankan batsmen as the wicket hardly has anything for the bowlers in Kandy.

“On this pitch which doesn’t have much help for the bowlers, we have to be very disciplined to get near a winning position. We have to cut down the runs and get wickets early tomorrow. We will definitely play to win but we also don’t want to lose control at any stage,” Taijul said after the end of the third day’s play.

“The rough areas aren’t producing a lot of sharp turns in any direction. It is generally a slow wicket. We just have to be disciplined and prey on the batsman's weakness,” he added.

Karunaratne remained unbeaten on 85, helping the hosts reach 229-3 at stumps on the third day and they are trailing Bangladesh by 312 runs.

The Tigers could not infiltrate enough with the ball to put Sri Lanka under pressure as Karunaratne shared 114 runs with Lahiru Thirimanne in the opening stand to get back the momentum.

However, the visitors were successful to take three wickets before the close of the third day’s play that may give them some confidence ahead of the last two days of the Test.

Taijul said that he was impressed with the way Taskin bowled as he seemed to be the most impressive one among the pace trio on Friday.

“Taskin bowled very well with good lines and lengths and was quite attacking. We are hoping that he can continue in this vein, which will really help the team,” he said, adding that five bowlers in the line-up helped them to have proper rest in the heat.

“It’s a humid condition over here so it’s an advantage for us if we use five bowlers for a Test match which helps the team. It helps me to take rest in the meantime, which also serves the same for the bowlers to make a comeback,” he said.