7 new films to be premiered on Channel i on Eid 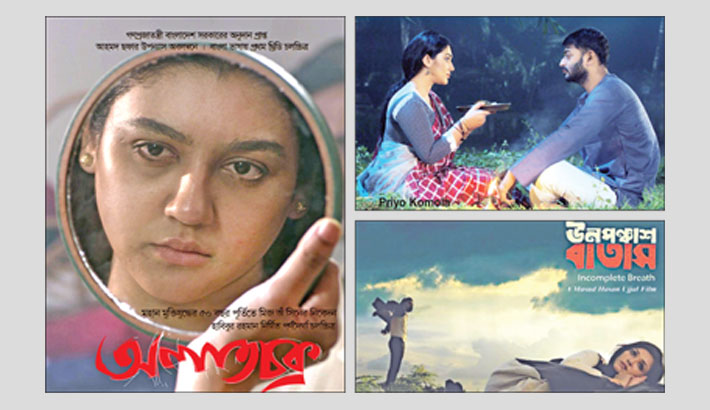 A total of seven films are set to have a world television premiere on Channel-i on the occasion of the Eid-ul-Fitr festival. Channel-i, the popular private TV channel of the country, will air the films of well-known directors and artistes for the audience across the world.

The seven films are Ahoto Phooler Golpo, Tumi Acho Tumi Nei, Unoponchash Batash, Alatchakra, Kathbirali, Priyo Komola and Shuttle Train. The films will be aired at 10:15am every day from the Eid day.

Among these films, ‘Ahoto Phooler Golpo’ will be aired on the Eid day. Directed by Anto Azad, the cast of the movie are Tahiya Tazin Khan, Shuzon Mahbub, Gazi Rakayet, Ali Ahsan and others.

‘Tumi Acho Tumi Nei’ will be aired on the second day of Eid. Popular director Delwar Jahan Jhantu is the director of the film, while Prarthana Fardin Dighi, Asif Imrose and Amit Hasan have played lead roles.

‘Unoponchash Batash,’, directed by Masud Hasan Ujjal, will telecast on the third day of Eid. Sharlin Farzana, Imtiaz Barshan , Elora Gohor, Enamul Haque and others will be seen in the film.

‘Priyo Komola’ will be telecasted on sixth day of Eid. Directed by Shahriar Nazim Joy, Apu Biswas and Bappy Chowdhury acted in two lead roles in the movie.

Directed by Pradip Ghosh, ‘Shuttle Train’ will be aired on the last day of the world premiere programme. Imran Hossain, Indrani Ghatak, Sadia Afroz, Dharmaraj Tanchanga, Annesha Mazumdar and others acted in the film.