Resurrection of Christ and believers’ lives 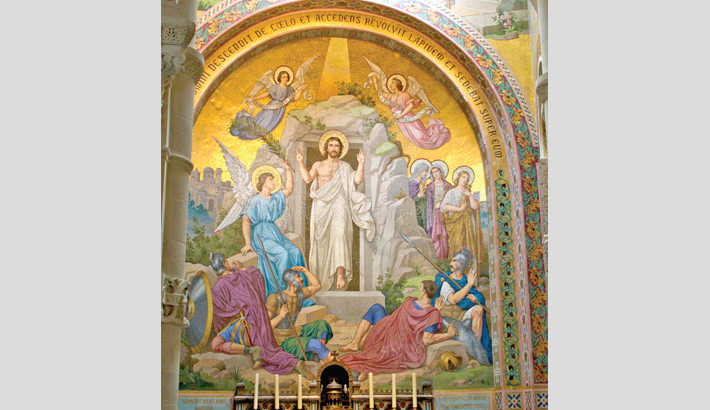 The Holy Octave, which this year fell during the eight days, 28 March-4 April, 2021 in the Christian calendar climaxes with the resurrection of Jesus Christ. Most of the significant events in the life of Jesus concerning the salvation of mankind took place during these last eight days starting with his triumphal entry to Jerusalem and cleansing the Jewish Temple one Sunday and completing with the resurrection on the next Sunday. The miracle of the resurrection is the supreme testimony to God’s love for mankind, his forgiveness of sin and his righteousness. This greatest of Jesus’ miracles is the testimony that God reigns supreme over death, the wage of sin, over nature, over the entire created order. If he did not rise from the dead, he could not prove what he said he is. If he did not rise he would be an impostor, could not forgive our sins and our faith would be in vain. Without the resurrection there is no Christianity! Billy Graham, the great evangelist in our time, aptly said, “The resurrection of Christ is the fulcrum of Christian Theology.” It is pertinent to quote from St. Paul here writing to the ancient Church in the city of Corinth: “If there is no resurrection of the dead, then not even Christ has been raised. And if Christ has not been raised, our preaching is useless and so is your faith. More than that, we are then found to be false witnesses about God, for we have testified about God that he raised Christ from the dead . . . And if Christ has not been raised, your faith is futile; you are still in your sins. . . If only for this life we have hope in Christ, we are to be pitied more than all men. But Christ has indeed been raised from the dead, the first-fruits of those who have fallen asleep. For since death came through a man (Adam) the resurrection of the dead comes also through a man. For as in Adam all die, so in Christ all will be made alive” (1 Corinthians 15: 13- 22).

The primary distinguishing mark of Christianity is its teaching about God. God reaches out to man in his grace. God is just and holy on the one hand and he is also loving and gracious. He must punish sin. But, he is gracious for sinful people, if they repent and come back to God in humility and authentic faith and trust.  He promised through one of his many prophets in the Old Testament, Ezekiel: Say to them, as surely as I live, declare the Sovereign LORD, I take no pleasure in the death of the wicked, but rather that they turn away from their wicked ways and live. Turn! Turn from your evil ways!” (Ezekiel 33:11). Man can never be good enough to please God and earn salvation from sin, which is God’s gift to be received in faith. God so loved the world that he gave his only begotten son that whosoever believes in him should not perish but have everlasting life of communion with God in eternal felicity. Christianity is vital personal relationship with God in Christ. Our God is not a whimsical God, but is righteous and just. He is so much so that he calls himself in the Bible “ a jealous God’ implying that he would leave no stone unturned to prove that he is what he says he is about his holy love, justice, forgiveness, his supremacy and sovereignty, his omnipotence, omnipresence, eternality, etc.

The unutterably humiliating death of Christ on the detestable cross demonstrates God’s just love for sinful human beings and also his holiness. God’s holiness demands the payment of a ransom-price for sin, which alienates man from God. Jesus Christ paid that price for us, for our reconciliation with our Maker. Why Jesus? Because of God’s love for us.  Paul wrote, “But God showed his great love for us by sending Christ to die for us while were still sinners.” (Romans 5:8). Again, why Jesus? Because in his sinlessness he could be the perfect and the only acceptable sacrifice for the propitiation for sin. God proved his jealous love and sovereign power in vindicating his son by raising him back to life, a new kind of existence, in an altogether different and transformed body.

In the Bible we see that God always has a time to act, it is a particular time, a momentum, an opportune moment, which is called ‘Kairos’ in Greek language. He allows sinful man to proceed with their evil thoughts and designs. God gives people time to change and waits till the end of wicked people exercising power and haughtiness. When people have done theirs God comes and shows his work. There are so many examples of this in the Bible. The ancient despotic Egyptian pharaoh reached the climax of his government torturing the ancient Hebrews and would not let them go. God acted and he liberated the Hebrew slaves by his sovereign power. The Romans and the Jewish rulers and leaders crucified Jesus; they all showed their earthly power and authority, nay, their evil designs and condemned him to death. They thought they finished and liquidated him for good. But, God raised his son from the dead as it was prophesied in the both the Old and the New Testaments.

He is worthy of our love, praise and worship. We worship him as he is God. But, above all God wants that we live in newness of life, we love and respect him and all his creation, all people. This is the challenging message of the resurrection, which shook the foundation of evil and death and also of all self-righteousness of man or external religious piety that is bereft of internal transformation of our lives.