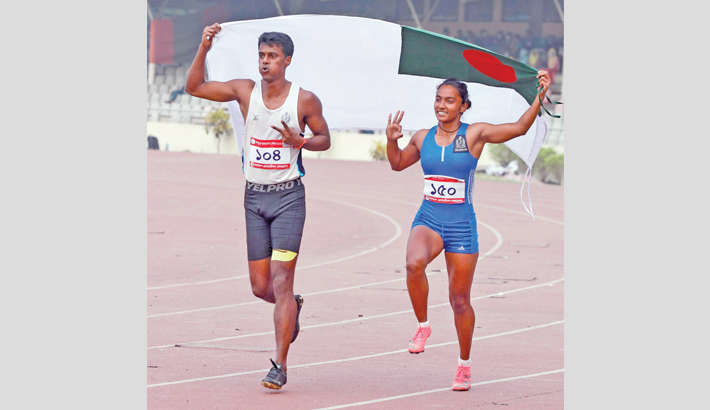 In a file photo on April 3 shows Navy athletes Md Ismail and Shirin Akter celebrate after winning gold medals in the men’s and women’s 100m sprint events during the Bangabandhu Bangladesh Games at the Bangabandhu National Stadium in the capital. — BOA photo

Md Ismail and Shirin Akter have been dominating the country’s athletics arena over the last many years. Both the athletes bagged gold medals in the men’s and women’s 100m sprint events respectively during the Bangabandhu Bangladesh Games, held earlier this month and retained their positions as the country’s fastest man and woman.

Ismail also clinched a gold medal in the men’s long jump event with securing a silver medal in the 4*100m relay event. On the other hand, Shirin bagged three more gold medals in the women’s 200m, 4*100m relay and 4*400m relay during the Games along with her 100m triumph.

Despite their invincible run in the national meets over the years, both the athletes consistently failed in the international events where they could not even demonstrate their best performance in the track and field events.

Ismail recently competed in the Imam Reza Cup in Iran where he finished eighth with a timing of 10.91 sec during the 100m event and he was also ruled out of the long jump discipline due to a hamstring injury.

The Bangladesh Navy athlete also disappointed during the 13th South Asian Games 2019 in Nepal where he finished fourth in the men’s 100m with a 10.70 sec timing.

Ismail felt that the age-old training techniques and lack of modern equipment lessen their performance level compared to others on the international stage.

“The local coaches here follow the age-old, traditional techniques in training. These techniques have no use now. The federations, service teams, clubs, DSAs should think about bringing better-skilled foreign coaches who know modern techniques,” Ismail told The Daily Sun on Wednesday.

“We also need a modern practice ground and a gym. Ground and gym are the two most essential parts of athletics. I've seen the other countries pay much attention to these two matters.  No one can enter there except athletes. But in Bangladesh, we use a stadium for different purposes -- we arrange football, cycling, athletics or social programs on the same ground,” he added.

The sprinter lamented for not earning a quota place in Iran for Tokyo Olympics and claimed that he has only one option left for the Olympic entry, the wild card.

“I went to Iran just after the Games. So, the injury was natural. We need at least a three to four months gap between the two events. Otherwise, the participation will just be a formality. I had a chance to qualify for the Tokyo Olympics through the Iran event but I missed it. Now, I only have a chance through wild cards,” he said.

Shirin, who won 13 consecutive gold medals in national meets, believed that the lack of nutrition is one of the main reasons behind their lagging behind compared to foreign athletes.

“I think another important problem for our athletes is the lack of nutrition. Most of the female athletes have been facing it. Our food chart does not provide the proper nutrition. So, we need to take proper supplements as per the experts' opinions,” said Shirin, who finished fifth in the 13th South Asian Games.

“It is highly expensive to consult a professional nutritionist. We are not able to bear them personally.

“These events are the most challenging and competitive because the best athletes take part here. If I want to get a prestigious result, I need to do the best training under a foreign coach. The Navy recently set up a big gymnasium with all modern equipment at Shaheenbag, Dhaka. They did half of the job, the federation should do the other half,” he said.

“The federation can arrange training, under the skilled coaches, here or outside of the country. We have two annual national events and an inter-service competition. They can send us to two or three international events besides these.  More participation will make us more experienced,” he added.