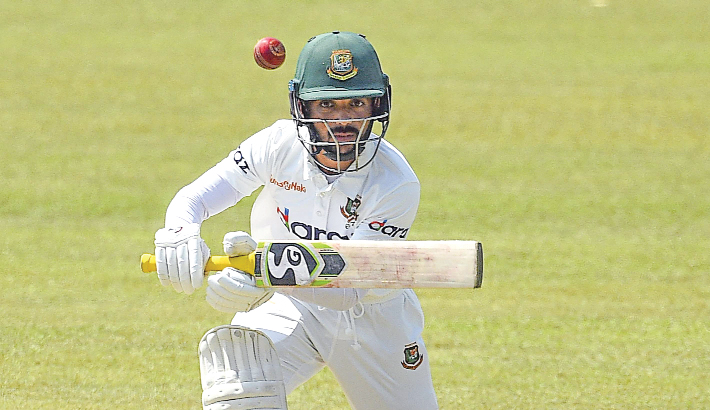 Bangladesh skipper Mominul Haque plays a shot during the second day of their first Test against Sri Lanka at Pallekele International Cricket Stadium in Kandy on Thursday. — AFP photo

Skipper Mominul Haque struck his first away Test ton while Najmul Hossain made 163 runs as Bangladesh is in the driving seat in the first of two-Test series against Sri Lanka in Kandy on Thursday.

Bangladesh made 474-4 in 155 overs before bad light forced an early stumps of the second day of the opening Test with 90 minutes play still to be taken place at Pallekele International Cricket Stadium. 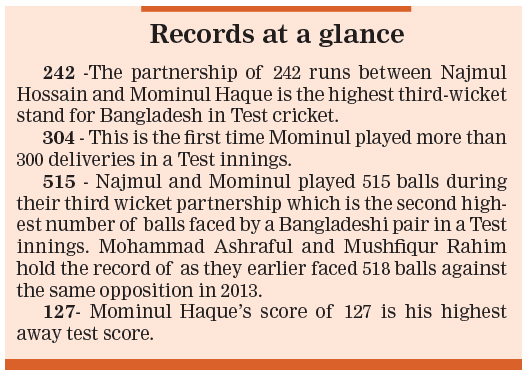 Mushfiqur Rahim and Liton Das remained unbeaten on 43 and 25 runs respectively and will resume their innings on the third day that will see a 15-minute early start in an attempt to make up the lost time.

Bangladesh batsmen continued their superb batting on the second day with Mominul and Najmul frustrated Sri Lankan bowlers in the opening session after resuming on 302-2.

Mominul, who earlier scored 10 Test hundreds all at home, firstly went past his previous best away innings of 77 runs that he made against South Africa in Potchefstroom in 2017 and then hit Dhananjaya de Silva for a boundary to complete his first away hundred.

Najmul also carried from where he left on day one and became only the second Bangladeshi batsman to convert his maiden Test into a 150 plus score after Mominul did it against New Zealand in 2013 when he scored 181 runs.

Najmul’s brilliant knock off 378 balls with 17 fours and a six finally came to an end when he was caught and bowled by pacer Lahiru Kumara after the lunch break, ending a record-breaking 242-run stand between the batters for the third-wicket.

The previous record was 236 runs made by Mominul and Mushfiqur Rahim against Sri Lanka in 2018.

Mushfiqur received a lifeline after taking a review on 11 after on-field umpire Kumar Dharmasena gave him out for lbw but the UltraEdge showed there was a spike.

However, the partnership could not last long as Mominul was caught at slip after making 127 runs off 304 balls, the highest number of deliveries Mominul faced in a Test innings.

Mushfiqur and Liton played out the remaining overs before early stumps, adding 50 runs in the fifth wicket, ensuring Bangladesh another impressive day at the business.