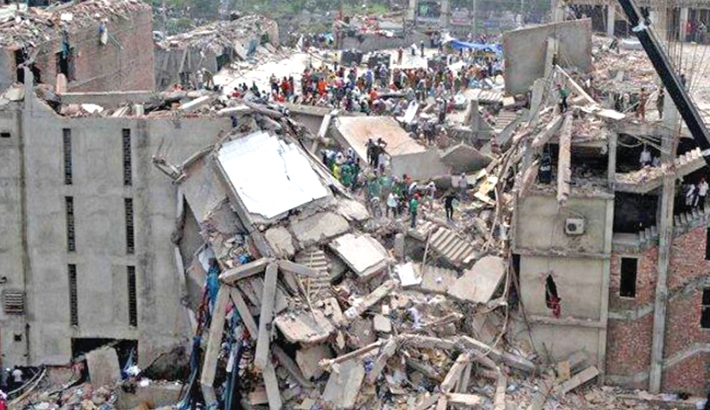 Around 57 per cent of the survivors of Rana Plaza—the deadliest industrial disaster in the history of Bangladesh that left more than 1,138 dead in 2013—have remained unemployed, according to a study.

The remaining 43 per cent of survivors are engaged in various types of wage and self-employment, according to the survey of ActionAid Bangladesh.

Besides, the income of most of the employed survivors has decreased drastically due to the Covid-19-induced economic fallout, it added.

These findings were disclosed in a virtual event titled ‘COVID-19: Challenges for the Rana Plaza Tragedy Survivors’ on Thursday, organised by ActionAid Bangladesh in memory of the 8th year of the Rana Plaza tragedy.

The survey was conducted among 200 survivors of the Rana Plaza collapse, 63 per cent of whom were female.

On April 24 in 2013, the Rana Plaza building collapsed in Savar, on the outskirts of Dhaka; leaving at least 1,138 people, mostly garment workers, dead and 2,500 injured.

Of the employed survivors, the study found that 43 per cent of them are engaged in various types of wage and self-employment where the household income of 37.5 per cent is between Tk 5,001 and Tk 10,300.

Despite surviving, many workers injured in the Rana Plaza collapse are still living miserable life. The physical health condition of 14 per cent of survivor is getting worse.

Among them, 58.5 per cent are more or less stable, and 27.5 per cent are completely stable, according to the survey.  “After the devastating collapse of Rana Plaza, many could not return to work due to physical and mental trauma. Many of the survivors returned to work but could not turn their fate. Many have changed their profession as a way of living. The outbreak of Coronavirus pandemic has again impacted on their lives,” the survey report said.

Lawmaker Shirin Akhter attended the event as the chief guest.

Shirin Akhter said creating an emergency fund makes it easier to get temporary relief from dangers like the Rana Plaza tragedy.

“Trade unions, employers and the government can work together to create a good working environment, transparency, and accountability in the factories. If we can confirm all these things, we can say that we have been able to bring positive change by learning from the horrors of the Rana Plaza incident,” added Shirin Akhter.

CPD Research Director Dr. Khondokar Golam Moazzem since the Rana Plaza collapse, there has been no positive change in the victims’ lives.

Despite some financial assistance, the process of reintegration of injured workers in the formal sector has not been introduced, they have to be brought under the reintegration process, added Moazzem.

ILO Country Director Tuomo Poutiainen said there is a requirement to improve security and governance on labour issues, and this needs institutional change.

“We have to create a culture of health safety for workers in factories and the government needs to enact legislation to ensure this,” Poutiainen added.