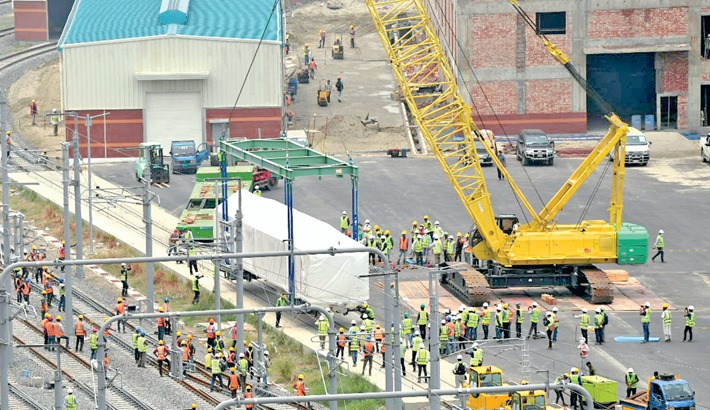 A coach of the first train set for Dhaka Metro Rail Project is being placed at the Diabari Depot of Dhaka Mass Rapid Transit by a crane on Thursday. —Md nasir uddin

Quader, also Awami League general secretary, said this while speaking at a press conference at his official residence on the Jatiya Sangad premises in the capital.

His comments came as the first set of the metro rail coaches arrived in Uttara Depot on Wednesday.

The minister said combined progress of electrical and mechanical system and procurement of rolling stock (rail coaches) and depot equipment is 52.22 per cent.

Talking about the metro rail coaches, he said the first set has already arrived in the newly constructed jetty of Dhaka Mass Transit Company Limited at Uttara Depot.

Kobe-based Japanese company Kawasaki also shipped the 2nd set on Wednesday, Quader said, hoping that it will arrive in Uttara Depot through country’s Mongla Port by June 16 next.

According to the plan, the metro rail will have 24 sets of coaches -- each having six coaches.

Quader also said the 3rd and 4th sets of coaches will arrive in Uttara Depot through Mongla Port by August 13 next. “The two sets will be shipped from Japan on June 13,” he said.

The 5th set of metro train coaches will be shipped on July 16 next and it is scheduled to arrive in the country on September 17 this year.

The minister also stressed the need for ensuring transparency in BRTA services and issuance of driving licences.