I don’t have anything to prove, says Najmul 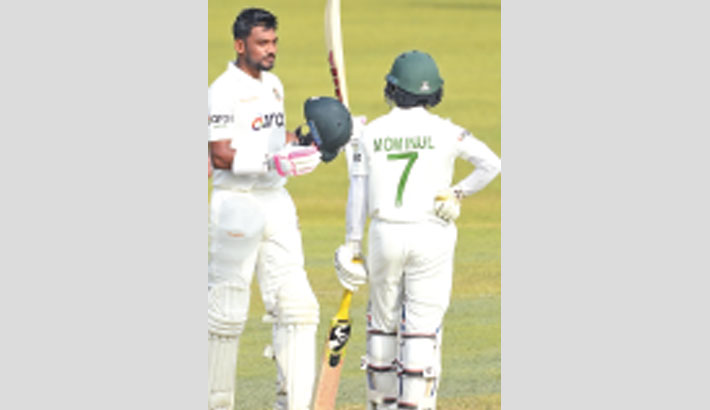 Bangladesh top-order batsman Najmul Hossain (left) celebrates his hundred against Sri Lanka on the opening day of the first Test in Kandy on Wednesday. — SLC PHOTO

Bangladesh batsman Najmul Hossain said on Wednesday that he didn’t take any added pressure in the middle which he felt played a big role in scoring his maiden hundred against Sri Lanka.

play in Kandy. Najmul left all kinds of doubts that were raised re-garding his potential fol-lowing his dismal show with the bat at the interna-tional level as he managed to convert his start to re-main unbeaten after day one that included 14 fours and a six.

“I don’t have anything to prove to anyone,” Naz-mul told reporters after stumps of day one.

that. The wicket was ex-tremely good to bat on and I am happy that I just carried on with my batting,” he added. Najmul added that his  partnership with Tamim

Iqbal helped him to build his innings.

raised the conﬁdence of Najmul in the green-top wicket in Pallekelle.

“Tamim bhai’s innings really helped me because he was batting with a lot of conﬁ-dence,” said Najmul.

“When I went to bat he told me that it was a good wicket and you should play your natural game. I followed his advice and it was beautiful to wicket to bat on,” he said, adding that he didn’t plan anything big af-

ter the arrival of Mominul with whom he shared an un-beaten 150-run stand.

“When he arrived I didn’t plan anything regarding our partnership, rather we just managed to keep it simple by crossing one small goal to the other,” he said.

“Naturally scoring runs gives you conﬁdence and I carried it here in the middle. I worked really hard in the last few months and I wasn't scoring runs but I knew if I

stick around and play my natural game I can score and I'm really happy,” he said.

“Mentally I'm thinking very positively and that has helped me a lot. My thought process was just to watch the

ball and play accordingly,” he said, adding that they want to bat deep con-sidering the wicket is expected to turn from the third day.