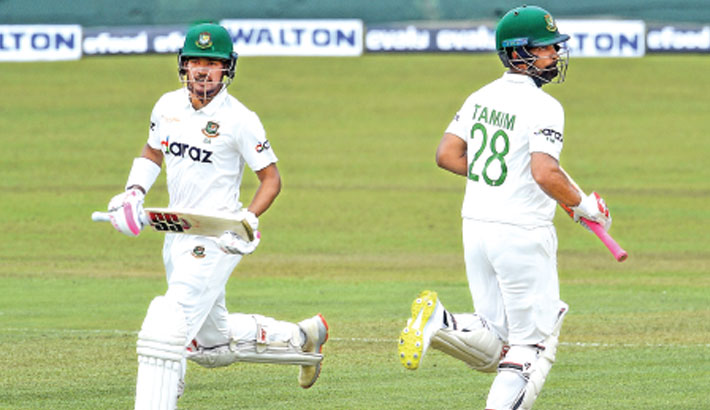 Najmul Hossain (left) and Tamim Iqbal run between the wicket during the opening day of the first Test against Sri Lanka in Kandy on Wednesday. SLC PHOTO

Top-order batsman Najmul Hossain has ﬁnally repaid the faith the team management keeps with him as he struck a brilliant unbeaten hundred against Sri Lanka on the opening day of the ﬁrst Test of the two-match se-ries in Kandy on Wednesday.

Najmul remained unbeaten on 126 off 288 balls, his maiden ton in inter-national cricket, while Tamim Iqbal and Mominul Haque made 90 and 64 (not out) respectively as Bangladesh scored 302-2 in 90 overs at stumps on day-1 at Pallekele International Cricket Stadium.

Najmul, who came in the middle after opener Saif Hassan got dis-missed for a duck in the second over, added 144 runs with Tamim in the second wicket and he then put up an unbroken stand of 150 runs with skip-per Mominul to help his side take con-trol in the ﬁrst Test.

The left-hander, who received crit-icism for not performing well despite

getting several chances both in red and white-ball cricket for Bangladesh, had to prove his worth in the game as he had a disastrous Test series against West Indies at home last time.

Najmul could manage only 40 runs in four innings in Bangladesh’s 0-2 se-ries loss against the visitors but the team management kept their faith with him and backed him for the Sri Lanka Test series.

The 22-year-old southpaw could not ask for a better place to get back in the form as he along with experienced Tamim Iqbal frustrated Sri Lankan bowlers in the ﬁrst session after Mominul won the toss and elected to bat ﬁrst on a batting-friendly surface.

Tamim initially took charge as he played a contrasting Test innings but he looked all settled to complete his 10th Test hundred after the lunch break.

However, the 32-year-old left-han-der threw away his wicket after hit-ting 15 fours in his 101-ball innings

while trying to guide a ball away to slip cordon only to get caught at sec-ond slip region by Lahiru Thiri-manne off Vishwa Fernando (2-61).

Despite Tamim’s fall on nervous nineties, only the ﬁfth time in his inter-national career, Najmul continued his terriﬁc batting display and he along with Mominul kept Sri Lankan bowlers and ﬁelders busy in a quest for another wicket in the remaining day.

Najmul was, however, lucky in the middle as he was dropped off an out-side edge by wicketkeeper Niroshan Dickwella off Dhananjaya de Silva on 28 but he did not look back since then and kept hurting the Sri Lankan side smashing 14 fours and a six to take the visitors to a strong position after the end of ﬁrst day’s play.

Both the teams ﬁelded three pac-ers each for the ﬁrst Test as Bangladesh played with Taskin Ahmed, Abu Jayed and Ebadot Hos-sain while Suranga Lakmal, Vishwa Fernando and Lahiru Kumara are representing the hosts.