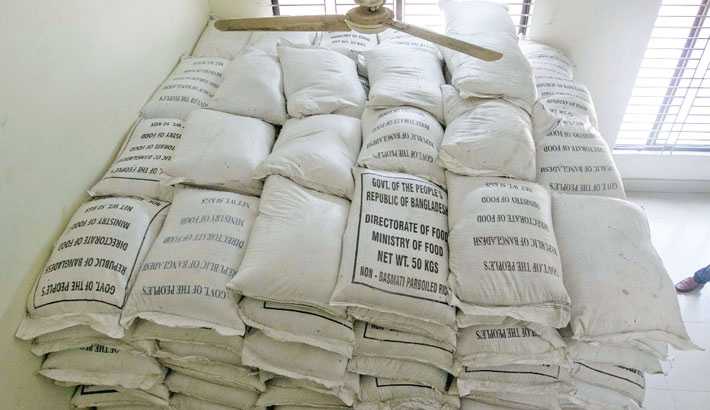 70,000 kilograms of government rice stockpile in sacks at a godown of Mahi Traders at Pahartali Bazar in Chattogram on Wednesday. — SUN photo

CHATTOGRAM: Members of Detective Branch (DB) of Chattogram Metropolitan Police (CMP) arrested a trader with 70,000 kilograms of government rice from the city’s Pahartali area on Wednesday.

The arrestee was identified as Abdul Bahar Mia, 44, owner of Mahi Traders at Pahartali Bazar.

CMP Deputy Commissioner (DB-Port) Faruk Ul Hoque at a press conference said on information, they conducted a drive at a godown at the city’s Pahartali Bazar.

The rice was supposed to go to Noakhali Food Department’s godown after importing from India.

But the consignment was sent to the Godown of Mahi Traders, said the DC.

A truck was also seized during the drive, he said.

One ‘Sabuj and Brothers’ was the carrier of the rice.

Bahar bought 260 sacks of the rice from the carrier at a price of Tk 40 per kg. The rest rice was collected from different parts of the country.

One Khokon helped Bahar to get the 260 sacks of rice.

In the primary interrogation, Bahar admitted that he collected the rice illegally and used to sell those changing the sack carrying the government seal, DC Faruk said.

The arrestee might be a member of the rice buying syndicate and drives will be carried out to nab the rest members of the gang, he added.