Dhaka airport goes to the dogs! 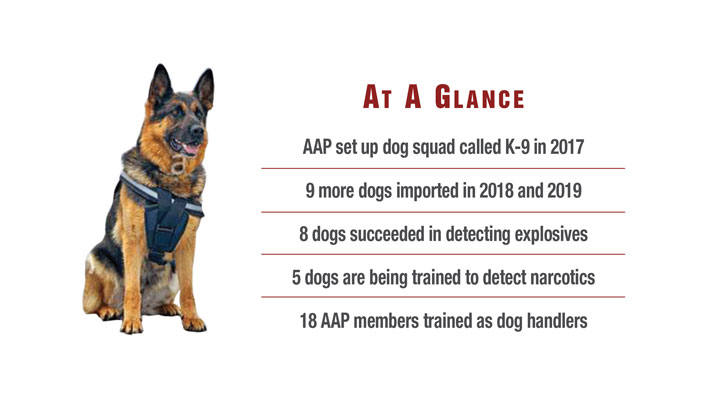 The Hazrat Shahjalal International Airport's security is in safe paws -- thanks to a pack of specially trained dogs that keep a strict vigil on the country's busiest airport, reports UNB.

AAP set up its dog squad, called K-9, with just four dogs imported from the UK in 2017. The squad got more teeth with the entry of four imported dogs in 2018 and five more a year later. K9 is a homophone of 'canine', popularly used in English-speaking countries.

The primary duties of the K9 members include searching for drugs and explosives, finding crime scene evidence, and attacking people targeted by the police. The dogs are also trained to remember several verbal cues and hand gestures.

"Eight members of the dog squad, part of the first two batches, have already been given special training to use their senses to detect explosives to keep the airport safe," AAP's Additional Superintendent (Operations and Media) Alamgir Hossain Shimul told UNB.

"These eight dogs have already succeeded in detecting explosives. The remaining five dogs are being trained to detect banned substances like narcotics. The aim is to keep the airport and the country safe," he added.

The US Embassy in Dhaka has been roped in to train K9 members. "Training is a continuous process. We've been training our dogs for about two years now. The American Embassy has been particularly helpful to us," Alamgir said. The police dog handlers too have been given special training. "Some 18 members of AAP have been trained as dog handlers. Previously, we had to depend on dog squads of different police units. Now, AAP has a dog squad of its own," the Additional SP said.

"Apart from keeping an eye on airline passengers, we use K9 members during routine drives at the cargo terminals," he added.

AAP has been keeping the airport secure since June 2010, with around 1,000 personnel. After completion of the airport's third terminal, it will require an additional 500 personnel. "Then we would be able to perform better," he added.

Prime Minister Sheikh Hasina has already directed the formation of dog squads at all airports in the country to ensure security . A project has also been approved at the meeting of the Executive Committee of the National Economic Council (ECNEC).

Earlier, it was decided to deploy armed police to strengthen security at all airports, including Hazrat Shahjalal International Airport.

Members of AAP are trained in crime prevention techniques. A Crisis Response Team (CRT), comprising 24 AAP members, has been specially trained by Dhaka Metropolitan Police's SWAT to prevent terror attacks at the airport.