Govt to procure vaccines from other countries 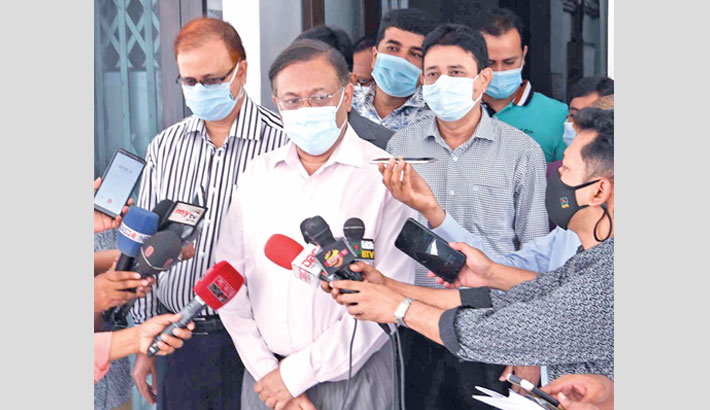 Information and Broadcasting Minister Dr Hasan Mahmud talks to journalists after receiving the second dose of Covid-19 vaccine at Clinic Bhaban at Secretariat in the capital on Wednesday. —SUN PHOTO

Information and Broadcasting Minister Dr Hasan Mahmud on Wednesday said the government has taken initiatives to procure coronavirus vaccines from other countries alongside India.

“Prime Minister Sheikh Hasina has taken initiatives to procure Covid-19 vaccines from other countries alongside India,” the minister said.

Hasan, also joint general secretary of the Awami League, said this while talking to reporters after taking the second dose of coronavirus vaccines at Clinic Bhaban at Secretariat in the capital.

The government has taken the decision as scheduled vaccines import from India has almost halted following rise in demand for the vaccine in the country.

Earlier, a deal was signed with the Serum Institute of India to provide 20 million doses of vaccine to Bangladesh.

“Propaganda was carried out through some newspapers and social media in creating suspicion among people about the second dose of the vaccine. But the reality is that some 1.7 million of people have already taken second dose of the coronavirus vaccine,” the minister said.

Prime Minister Sheikh Hasina has been aware of giving health security to the country people from the very beginning of the pandemic, he said.

For this, Bangladesh is ahead of many developed nations in combating the coronavirus pandemic and vaccination, he added. Extending thanks to media in preventing rumours, the minister urged all media to remain vigilant in this regard.