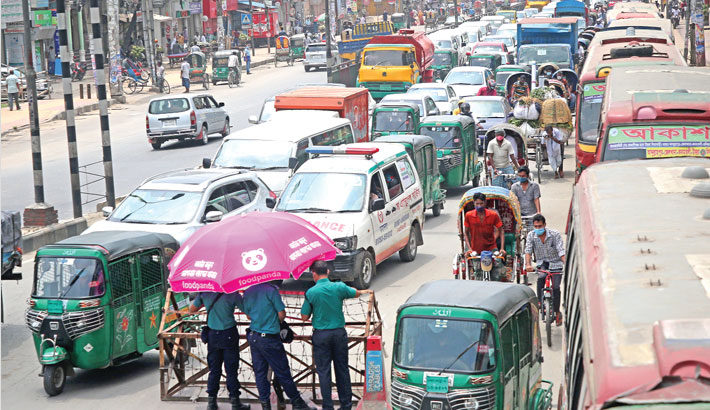 The number of both people and vehicles continued to rise on streets in the capital amid the lockdown. The photo taken on Wednesday shows vehicles stuck in a tailback at Madhya Badda. – SUN PHOTO

As the ongoing lockdown entered the eighth day on Wednesday, it has little impact on streets in the capital.

Dhaka witnessed a significant rise in public and vehicular movement on the streets throughout the day on Wednesday as law enforcers were not serious about monitoring.

Health rules were hardly maintained at the kitchen markets while cars, rickshaws and auto-rickshaws moved around freely.

In some areas in the capital, severe traffic congestions were created on Wednesday.

Police men were not taking any measures against the lockdown breakers.

Witnesses said although the number of vehicles on the city roads was less at the beginning of the lockdown, all types of transport except buses are now seen on the streets.

Besides, the movement of people has increased on the streets despite strict restrictions on their movement.

While visiting main thoroughfares in Shyamali, Asad Gate, Mohammadpur, Mirpur, Dhanmondi and Farmgate areas, this correspondent found all modes of transports, except buses, plying the roads.

At some check-posts, police were seen sitting idly and rarely stopping people for checking "movement pass".

In the morning, pressure of private vehicles and transports arranged by workplaces was higher on the streets because of office timing.

The scenes at kitchen markets were as usual -- teeming with people in the morning.

With coronavirus cases continuing to rise alarmingly from mid-March, the government imposed a nationwide "lockdown" for one week from April 5 as part of its move to contain the virus' spread.

Later, a weeklong "stricter lockdown" was declared from April 14, which has been extended till April 28.