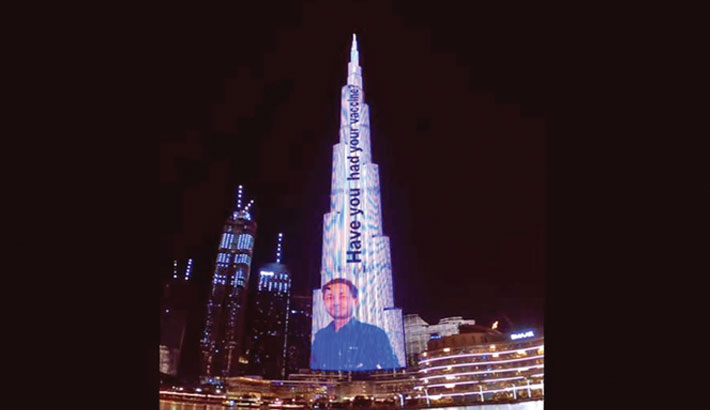 Bangladeshi migrant worker Mosharraf Hossain has been honoured as a frontline hero in the United Arab Emirates (UAE) with his image screened on the iconic Burj Khalifa building, the highest skyscraper of the world, recently.

A video clip of the event featuring the portrait of Mosharraf along with seven more frontline heroes of the Gulf country was uploaded on the Facebook page “Frontline Heroes UAE” on April 16.

With the video pose the message read, “Burj Khalifa, an iconic global landmark, is honouring #OurUAEHeroes and telling their stories to the world.

Frontline Heroes took care of us when we needed them the most, and now it is our turn to reciprocate the support. Show your support to our heroes by getting your vaccine!”

According to Gulf News, Mosharraf, 38, is one of the frontline volunteers and professionals recognised and supported by the Frontline Heroes Office in UAE for making personal sacrifices in the oil rich country’s battle against the pandemic.

His work before the Covid-19 outbreak was in the emergency pest control department of Dubai Municipality, where he has worked since 2006.

The report published last month said the Bangladeshi young man was part of a team that responded to calls from residential areas about potentially dangerous animals.

When the pandemic broke out, he began working for the National Sterilisation Programme in the UAE.

To prepare himself for the role, Mosharraf attended a training workshop that covered personal protection against the virus and mixing and applying disinfectant chemicals.

While speaking about his work during pandemic, he said he had to go to work riding a heavy vehicle, bike or complete task through drone camera wearing mask, gloves, face shield and other protective equipments.

And according to him, the whole journey was really a tough one. “But I worked tirelessly throughout days and nights. I understood my work was crucial. My family members often felt worried about me,” he said.

Mosharraf Hossian’s village home is located in Cumilla. He has wife, a daughter, seven brothers and two sisters at home.