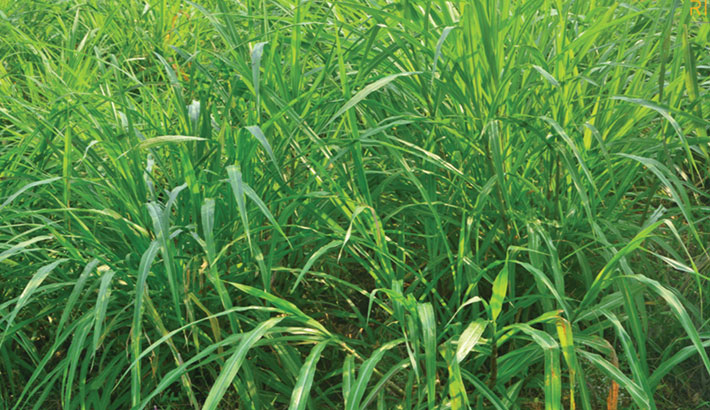 RANGPUR: Many farmers have achieved self-reliance and changed fortune through commercial basis cultivation of high yielding variety Napier grass across the district during the last 12 years.

“Cultivation of Napier grass has become a profitable venture for farmers who can easily earn Taka one lakh annually by farming the highly nutritious Napier grass on one acre of land,” said Acting District Livestock Officer Dr Md Sirajul Haque.

As the livestock and dairy sectors are boosting rapidly during the last 12 years, demand for nutritious green grass continues increasing as fodder for heads of cattle, cows, goats and sheep and attracts more farmers in farming the grass, reports BSS.

Farmer Akhterul Islam of Sreerampur village under Chandanpat union of Rangpur Sadar upazila said he has been cultivating Napier grass on only 12 decimals of land for the past six years spending Taka 7,000 annually as farming costs.

“After meeting demand of my four milk-giving cows, I earn a net annual profit of around Taka 20,000 by selling the harvested grass eight times annually,” said Akhterul.

Farmer Nanu Chandra of nearby Matiyapara village said he has been cultivating Napier grass on his one acre (100 decimals) of land during the past nine years.

“I generally spend Taka 45,000 for cultivating the grass, including labour costs, on my one acre of land, and harvest the grass eight times annually and sell those at Taka 3.40 lakh to earn a net profit of Taka three lakh every year,” Nanu said.

Dairy farm owner Mizanur Rahman of Jummapara area in Rangpur said he purchases 900 kg of Napier grass for feeding his six cows and five heifers every week at Taka between 1,300 and 1,500 depending on various seasons.

Senior Coordinator (Agriculture and Environment) of RDRS Bangladesh Agriculturist Mamunur Rashid said Napier grass cultivation has become a profitable venture and attracts more farmers in farming the grass every year in the district.