Mamunul admits to his involvement in mayhem 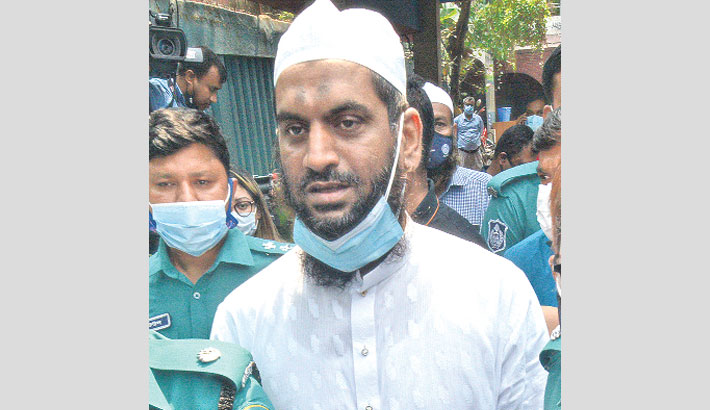 Hefazat-e-Islam joint secretary general Mamunul Haque on Tuesday admitted that he used madrasa students to carry out violent activities across the country in a bid to grab state power.

Mamunul, who is on a seven-day remand following his arrest in connection with a vandalism case, gave this confessional statement during interrogation by the police.

A Dhaka court on Monday granted seven-day remand for the controversial Hefazat leader a day after he was arrested in a case filed with Mohammadpur police station.

“During interrogation, Mamunul told policemen that he provoked madrasa students to carry out violent activities across the country in a bid to grab state power,” he said.

“Mamunul confessed to his involvement in assaulting Tabligh Jamaat group, who loyal to Maulana Saad. He also admitted to delivering defamatory speech against prominent citizens of the country,”.

About his three marriages, the Hefazat leader told the police that he had registration of his first marriage, but there is no documents of his two other marriages.

Meanwhile, the Criminal Investigation Department (CID) said they found involvement of Mamunul in recent violent activities in Narayanganj during Indian Prime Minister Narendra Modi’s Dhaka visit to join the celebrations of the birth centenary of Father of the Nation Bangabandhu Sheikh Mujibur Rahman and the golden jubilee of the country’s independence.

Additional Inspector General of police Barrister Mahbubur Rahman, also the chief of the CID, said this while talking to reporters at the CID headquarters in the capital on Tuesday.

“During preliminary investigation, we have found Mamunul’s involvement in the acts of violence in Narayanganj. He will be shown arrested in a case filed over the mayhem. If we find his involvement in other cases, we will take action against him as per laws,” he said.

Barrister Mahbubur also said after completion of the seven-day remand, the CID will seek remand for him from the court in another case filed with Siddhirganj police station in Narayanganj.

Hefazat-e-Islam carried out vandalism, arson, attack on law enforcers and other acts of violence across the country, protesting the arrival of Indian Prime Minister Narendra Modi.

Like many parts of the country, Hefazat carried out violent activities in Siddhirganj of Narayanganj.

On March 29, two cases were filed against Hefazat leaders and activists with Siddhirganj police station under Anti-Terrorism Act-2009 (Amendment-2013).  Mamunul was found involved in the mayhem and he will be shown arrested in one of the cases.

Barrister Mahbub said the police headquarters handed over 23 cases against Hefazat leaders and activists to the CID for murders, explosions, sabotages and other acts of violence. Five cases were filed in 2016 while 18 were filed in 2021.

Of the 23 cases, two were filed in Narayanganj, 15 in Brahmanbaria, two each in Kishoreganj, in Chattogram and in Munshiganj, he added.

Barrister Mahbub said Hefazat carried out violent activities from the end of March to the beginning of April in the name of meeting their demands.

“Several teams are carrying investigation in the 23 cases. Our forensic, DNA and Cyber experts are assisting us in the investigation,” he added.

Asked whether any other senior Hefazat leaders, including its Amir Junaid Babunagari, are involved in the mayhem carried out protesting the arrival of the Indian premier, he said that they primarily found involvement of three types of people.

“Some were directly involved, some indirectly assisted and some backed the mayhem from behind. We cannot disclose anything about it for the interest of investigation,” he said.

In response to another question as to whether action will be taken if any elected public representative is found involved in Brahmanbaria violence, he replied in the affirmative.

On April 3, local people caught Mamunul along with a woman at Royal Resort in Sonargaon upazila of Narayanganj district.

Police in a raid on Sunday arrested the Hefazat leader from Jamia Rahmania Arabia Madrasa  at Mohammadpur in the capital.