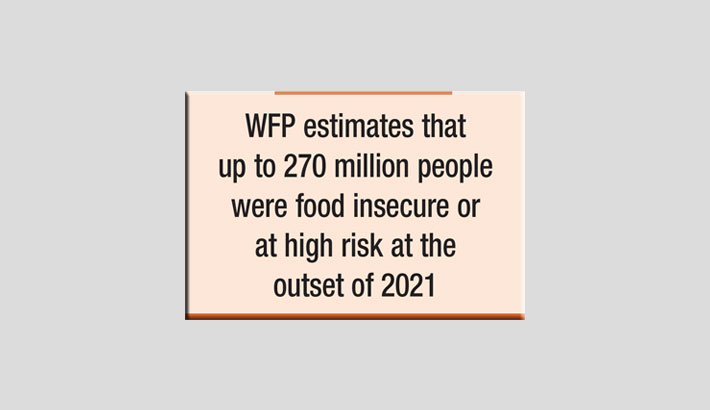 The sum was called for by the United Nations’ World Food Programme (WFP) and Food and Agriculture Organization (FAO) in March to swiftly scale up action to avert famine.

The NGOs said donations so far this year had been a mere fraction of what was required to prevent situations from worsening in hunger hotspots around the world. “We call on you to provide the additional $5.5 billion needed for urgent food assistance to reach more than 34 million girls, boys, women and men around the globe who are a step away from famine,” the open letter said.

“This assistance must begin immediately and reach as directly as possible the people most in need, now, so they can take action to feed themselves today and in the future.”

The letter was penned by NGOs working with an estimated 270 million people “facing hunger, starvation or famine all over the world”.

They include Oxfam, Christian Aid, World Vision, Tearfund, Save the Children and Care International.

“In Yemen, Afghanistan, Ethiopia, South Sudan, Burkina Faso, DR Congo, Honduras, Venezuela, Nigeria, Haiti, Central African Republic, Uganda, Zimbabwe, Sudan and beyond we help people who are doing all they can to simply get through one more day,” the letter said.

“These people are not starving, they are being starved.

“It is human actions that are driving famine and hunger and it is our actions that can stop the worst impacts,” the NGOs insisted. “There is no place for famine and starvation in the 21st century. History will judge us all by the actions we take today.”

They said the number of people experiencing acute food insecurity had remained persistently above 100 million over the previous four years.

“In 2019, the figure rose sharply to 135 million across 58 countries, driven by more conflict, climate extremes and economic turbulence. This number has since dramatically increased including due to the compounding effect of the Covid-19 pandemic,” the UN agencies said. The WFP estimated that up to 270 million people were acutely food insecure or at high risk at the outset of 2021.

The FAO’s Food Price Index was 2.1 percent higher in March than in February, marking the 10th consecutive monthly rise and taking the index to its highest level since June 2014.

It was led by strong increases in the prices for vegetable oils, meat and dairy products. Oxfam International’s executive director Gabriela Bucher said: “The richest countries are slashing their food aid even as millions of people go hungry; this is an extraordinary political failure. They must urgently reverse these decisions.”

The UN has described Yemen as the world’s worst humanitarian crisis.

At a pledging conference last month, the UN sought to raise $3.85 billion from more than 100 governments and donors to address that crisis, but only $1.7 billion was offered. Famine could become part of war-torn Yemen’s “reality” in 2021, it warned.

Save the Children’s chief executive Inger Ashing also decried the lack of funds raised for Yemen, a country “at a tipping point”.

“We have warned donors over and over again—their inaction is leading to death,” she said.

“That thousands of children will be dying of hunger and disease in 2021 is a political choice.”