Shoots up extreme poverty by 4pc 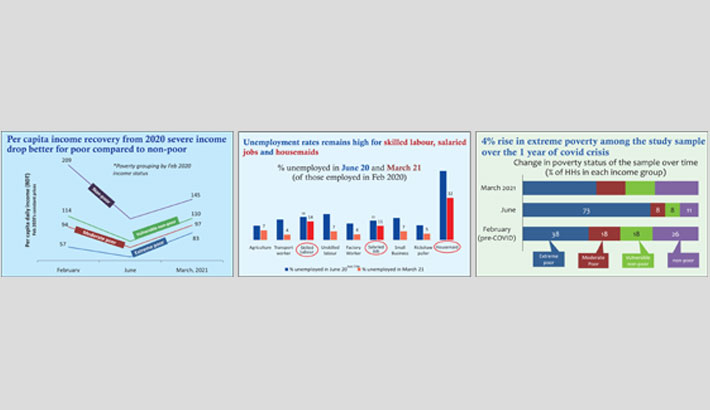 Bangladesh is facing second wave of Covid-19 with a fragile recovery from the first wave that has left 24.5 million new poor and shot up extreme poverty by 4 percent in a year of pandemic, finds a new study.

The study suggests a ‘Smart’ lockdown to avoid 2020 type income shock during the second wave of the pandemic as both a health and an economic priority.

Interestingly, rural poor showed resilience as they witnessed 1.9 percent income increase in contrast to urban fragility that reflected in 13.7 percent income loss by urban poor in one year, he said.

PPRC-BIGD conducted the study: “One Year into the Covid-19 Crisis: Poverty Dynamics and Household Realities” between April 2020 and March 2021 to present real time Covid-19 impacts data.

It captured the changing poverty impact of the Covid-19 health and economic crisis on low-income people.

One year into the Covid-19 pandemic, the poor across Bangladesh are still struggling with their livelihoods and facing emerging vulnerabilities, like mounting debt and dwindling savings, the study finds.

respectively and debt burden doubling between June, 2020 and March 2021 for most groups.

Income drop for the poor and vulnerable was above70 percent immediately after the first wave in March-April, 2020

Per capita income still remained below 7 percent of pre-covid level in March this year while income was 14 percent below in urban slums.  8 percent of pre-COVID employed were still unemployed in March 2021, according to the new study.

Occupational recovery concentrated in unskilled sectors. 41 percent in both rural and urban sectors had to move to less skilled sectors. One year from the crisis, around half were in their pre-covid occupation but 41 percent had to move to another low-skilled occupation by March 2021. Women were doubly burdened– unemployment rate among female-headed households5times higher than men, women also face greater re-entry constraints into labour markets.

Food expenditure was 16.7% below pre-covid levels in urban slums. 52 households had no meat, 72 percent had no milk, 40 percent had no fruit in their weekly diet in March 2021.  Income still remains below pre-COVID levels for all occupations except agriculture income. Recovery is weaker for transport worker, skilled labour, small business and rickshaw-puller

Dr Imran Matin, Executive Director of BIGD showed the percentage of new poor among the vulnerable non-poor (VNP) is 50 percent at present, 59 percent in urban slums and 44 percent in rural areas.

The number of new poor immediately after the pandemic was 21.2 percent which has now come down to 14.8 percent, which is still a staggering number.

One third of the women employed before COVID have been unemployed since June last year. In contrast male unemployment came down from 16 percent to 6 percent. Women also face greater re-entry constraints into labour markets.

He also pointed out the large shift to more vulnerable occupations like day labouris increasing the livelihoods vulnerabilities of the In fact, only the agriculture sector has seen positive net growth in income from pre-Covid levels.  The dire state of income opportunities in the cities is probably why migration from urban slums has been the most extreme. A total of 27.3 percent of urban dwellers have migrated in the last year, of which 9.8 percent have not yet returned.

Revealing the study findings, Dr Zillur said: “Social protection has played only a token role in covid response but is a critical priority.” All types of support declined between June, 2020 and March 2021. Support from the government declined from 9 percent to 2 percent, from NGOs  support fell from 3 percent to 1 percent, from the employer it came to zero from a mere 1 and local community support shrank from 5 percent to 2 percent. Parallel to existing safety nets, urgent need for specific new and significant programmes for urban poor and ‘new poor’ with effective targeting and leveraging technology, Dr Zillur suggested.

For this a targeted ‘big-push’ is necessary which calls for an urgent national CSME recovery action plan, he pointed out.